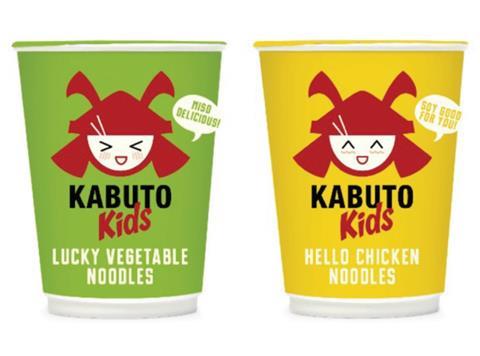 Instant flavoured noodle brand Kabuto is set to expand its offer in early 2019 with its first lineup for children.

Two Asian-inspired pot variants for kids – Hello Chicken and Lucky Vegetable – are expected to arrive in grocery in late January or early February, after around a year’s development.

Designed to be a convenient light meal for youngsters aged five to 12, they are less spicy than Kabuto’s standard lines, with shorter egg noodles for easier handling. Salt and sugar per 100g are around 0.4g and 3g respectively.

The 60g pot (rsp: £1.75) has a cardboard sleeve featuring puzzles, facts and jokes on the reverse.

Kabuto Kids will be joined on shelf by the brand’s first two gluten-free pots to include vermicelli noodles. Prawn Coconut Curry and a vegan-friendly Vegetable Katsu will have an rsp of £2 for 65g.

News of the NPD comes as the flavour noodles category is performing robustly. It has added 4.2% to its take-home value sales in the past year, reaching £60.9m, as shoppers sought out convenience and the exotic world flavours provided by premium brands [Kantar Worldpanel 52 w/e 22 April 2018].