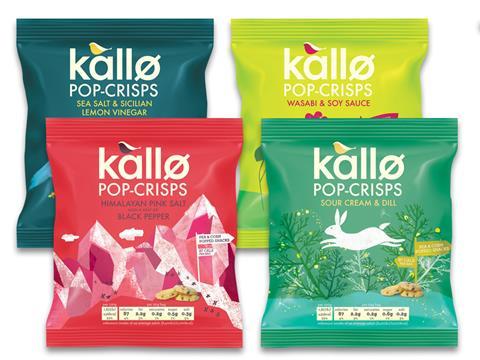 Pop-Crisps were made with popped corn pieces and split peas

Launched in January 2018, the four-strong lineup marked Kallø’s debut in bagged snacks. They were made with popped corn pieces, split peas and natural flavourings.

Pop-Crisps were “ideal for those looking to swap their more calorific snacks for something better for them, supporting rising demand for healthier lifestyles” said Kallø at the time of the launch.

However, the brand took the decision late last year to axe the crisps after they were unable to secure shelf space at the leading supermarkets.

“Unfortunately, none of the top five grocery multiple listings were secured for Pop-Crisps,” said a spokeswoman for Kallø. The brand “couldn’t sustain the ongoing minimum order quantities for smaller retailers and therefore had to take the hard decision to delist” the snacks.