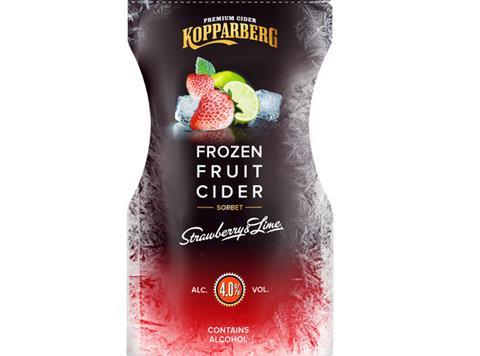 Kopparberg is tapping the trend for pouched frozen drinks with what it claims is the world’s first frozen cider.

Rolling out over April and May, Kopparberg Frozen Fruit Cider will be available in individual 250ml metallic pouches from more than 1,000 UK stores, including Tesco, Asda, Morrisons, The Co-op and selected c-stores. It comes in two 4% abv variants, Strawberry & Lime and Elderflower & Lime (rsp: £2.99).

Kopparberg said the NPD had been inspired by an online April Fool’s prank the company ran last year about launching a cider ice lolly. The joke quickly turned into a national phenomenon, according to Kopparberg brand manager Jodie Alliss.

“The demand for a frozen variation of Kopparberg was outstanding so we’re thrilled to be able to launch the new product for summer 2015,” she said. “Offering the ultimate summer refreshment and resonating with a slightly older audience, Kopparberg Frozen Fruit Cider takes the brand’s offering to the next level.”

News of the launch comes as frozen drinks pouches have transformed the RTD category, trebling in value in the past 12 months to  £16m [Nielsen 31 January 2015], and now accounting for 7% of value sale of RTDs.

The Kopparberg launch will be backed with PR and social media over spring and summer.