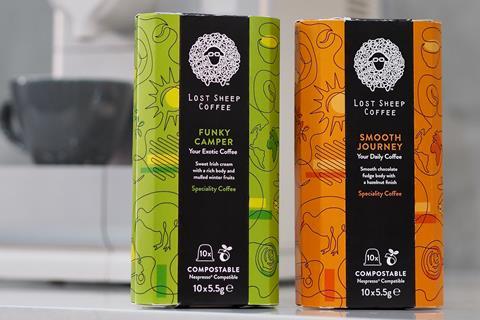 Kent coffee roastery Lost Sheep Coffee has made a move into grocery with a range of eco-friendly pods, which the business claims marks a UK first.

The compostable capsules are the first to contain speciality grade coffee – rated one on the coffee industry’s standardised scale of one to five from best to worst – according to Lost Sheep.

By comparison, coffee available from supermarkets was typically lower quality at grade three or four, said the Whitstable-based brand. Such coffee was “a huge mix of different coffees from around one country, all at a very low price point. Speciality coffee enables farmers to receive direct recognition for their efforts and also up to four times as much money per crop than if it was a lower-grade coffee.”

Lost Sheep’s two variants, Smooth Journey and Funky Camper (£3.95/10x5.5g), are made from beans from the Cachoeira region of Brazil. They come in Nespresso-compatible pods made from waste wood bark from the paper industry, combined with “naturally occurring plant-based proteins, starches and glucose”.

They can be composted domestically, and will completely break down in 18 weeks or less. Their outer packaging is 100% recyclable.

The new pods have a shelf life of 12 months – which was considerably longer than many similar products previously available in supermarkets, said Lost Sheep founder Stuart Wilson.

“Until recently, compostable capsules had a very short shelf life as the coffee inside would go stale. Without plastic or glue it is incredibly difficult to create an airtight seal over the product. After extensive research and development, our new capsules achieve a level of oxygen impermeability.”