Meat The Alternative to take on Quorn with chilled range 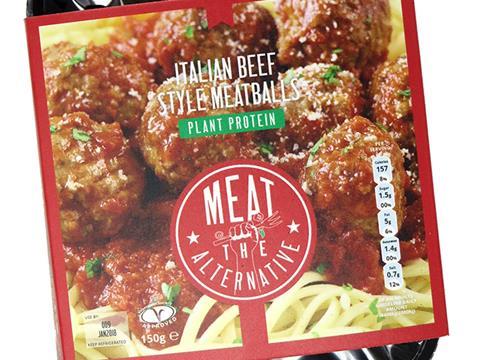 Meat-free business Meat The Alternative has undergone a rebrand, as it moves away from own label frozen supply and gets ready to launch a chilled branded range in the mults as a challenge to category leader Quorn.

The supplier has created an 11-strong range of meals, including beef-style mince, chargrill-style quarter pound burgers and Italian beef-style meatballs. It will be sold from next month in Waitrose and Ocado in the UK, and Dunnes in Ireland.

Meat The Alternative, formed by ex-Cranswick convenience foods commercial director Tony Watson in 2012, decided to refocus the business 12 months ago to target the flexitarian trend. A quarter of the UK population is actively reducing meat consumption, according to Mintel [August 2017].

“Our premium brand is the only one targeting this growing consumer group directly, delivering meat-like textures and tastes without compromise,” Watson said.

Watson added he had a long-term vision of positioning the brand in the meat aisle.

Meat The Alternative has generated turnover of about £8m since launching, selling 6.5 million packs, with sales peaking at £2.2m in the 2015/16 financial year. It now needs to rebuild the top line after turning away from frozen own label supply, which made up 80% of the business.

The business is currently exploring funding options to help it put its growth plan into action.