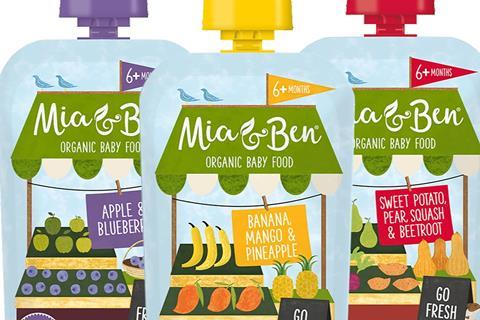 London startup Mia & Ben is making its in-store debut with Sainsbury’s, rolling out a three-strong chilled range of organic babyfood.

Apple & Blueberry, Banana, Mango & Pineapple, and Sweet Potato, Pear, Squash & Beetroot (rsp: £1.50/100g) are made without additives, using high-pressure processing. This meant they had “the same flavour, colour, aroma and consistency as homemade food, and all of the natural vitamins stay locked in” Mia & Ben said.

However, smoothies maker Savse unveiled a similar chilled babyfood lineup made using HPP in May 2017. Five variants in a pouch were aimed at infants aged four months and over. But it failed to gain traction and was axed before the end of the following year, having only Waitrose for a major high street listing.

Mia & Ben is nevertheless certain there is significant demand for fresh babyfood in a pouch. “While other food sectors have undergone significant innovations, baby and toddler food production hasn’t evolved to meet the demands of modern parents,” said Karina Gentgen, who co-founded the brand with her business partner Daniel Auner. Their goal was “to use the latest food technology to provide parents with fresh, healthy food that their kids will love” she added.

Raymond Downie, senior buyer at Sainsbury’s said: “Mia & Ben was the right choice for us to be our first Future Brand in the [babyfood] category. We think it will offer consumers in the UK a new option when it comes to choosing natural on-the-go options for their kids.”

The rollout comes as babyfood is struggling in the mults. Value has slumped by 6.6% while volumes are down 7% [Nielsen 52 w/e 7 September 2019] – largely due to the birth rate in England and Wales being at an all-time low.