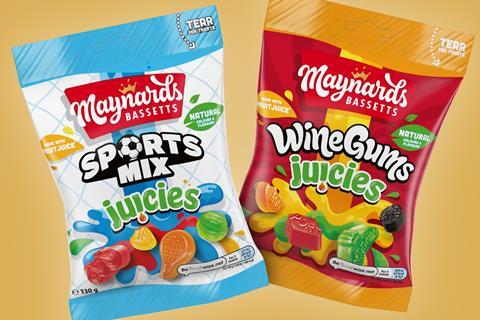 Rolling out through August, the sweets contain real fruit juice and 30% less sugar than their standard equivalents. Mondelez said they would not “compromise on taste, a key selling point for consumers”.

Confectionery shoppers were “still looking for the best-tasting products which are also fun, made for sharing and made with trusted, authentic ingredients”, said Mondelez brand manager for joyful Anna Ulrich.

“The core range of each of these brands will still be available, offering more choice than ever through our expanded portfolio in a soon to be HFSS-restricted world,” said Ulrich.

Mondelez said the sweets had performed “brilliantly” in consumer testing, with 77% of respondents to a survey saying they expected them “to excel on taste”, while 71% said they intended to purchase the NPD.

Maynards Bassetts was “ideally placed to tap into the authenticity and naturalness trend with this new range”, it added.

The news makes Mondelez the latest in a torrent of suppliers to roll out non-HFSS NPD ahead of the clampdown.

Snacking brand Brave, for instance, this week launched a non-HFSS breakfast cereal made from pulses.