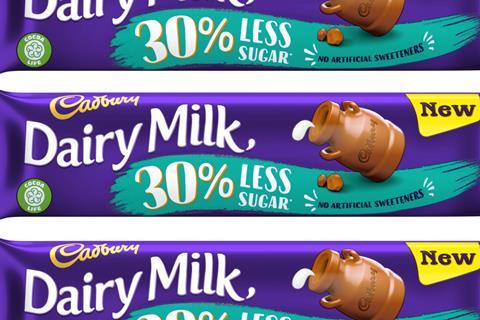 Mondelez has unveiled its reduced sugar version of Cadbury Dairy Milk – 12 months after revealing its plan for the healthier chocolate bar.

After about 35 recipes and six rounds of consumer testing, they had finally harnessed “leading-edge understanding of flavour technologies and material science” said Mondelez. “Our experts have replaced the sugar with fibre in a way that reduces the sugar while staying true to the iconic texture and taste profile of Cadbury Dairy Milk.”

Made with a minimum 20% cocoa solids and no artificial sweetener, the new bar contains 37g of sugar per 100g – compared to regular CDM’s 56g. Its calorie content and satfat are also 5% and 6% lower respectively.

The launch comes after Mondelez announced in July 2018 that it was working on the new chocolate in a bid to tackle the UK’s ongoing obesity crisis – having first revealed its intention to launch such a bar 12 years ago.

Reducing sugar was “the number two healthy eating driver for our consumers” CDM brand manager Katrina Davison told The Grocer. This was especially the case with older shoppers. “Seventy-one percent of the confectionery category’s value comes from the over-45s, and they’re the ones most interested in reducing sugar,” she added.

Available as an 85g tablet (rsp: 1.49) and a 35g single (rsp: 65p), Cadbury Dairy Milk 30% Less Sugar is smaller than original CDM but priced the same. It will be backed by a £2m spend across OOH and digital, and is intended by Mondelez to be ranged alongside full-sugar chocolates.

“The new bars are a new addition, not an alternative to the wider range,” said Davison.

They follow an announcement last week by Nestlé that its team in York had created a chocolate made entirely from cocoa fruit and no added sugar, using the beans and pulp as the only ingredients.