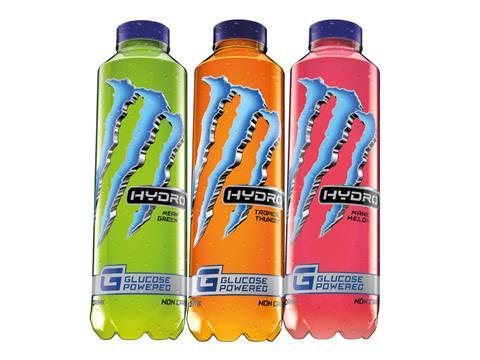 Coca-Cola European Partners is looking to broaden the appeal of its Monster brand with the launch of Monster Hydro – a new ‘refreshment’ energy drink and the first bottled Monster range in the UK.

The  soft drinks giant wants to tap demand for thirst-quenching options by targeting the ‘refreshment’ subsector of energy currently dominated by Lucozade Energy and Lucozade Zero.

Monster Hydro will roll out later this month in a colourless 550ml PET. It has a wide mouth to make the beverage ‘chuggable’. Non-carbonated for easier drinking, the lineup will be available in three flavours: Tropical Thunder, Mean Green and Manic Melon.

Monster Hydro was an “example of how we are investing in our portfolio of leading brands to offer consumers more choice”, he added.

It will be supported by sampling to “get the product into people’s hands”, targeting “mainstream” locations such as railway stations and city centres.