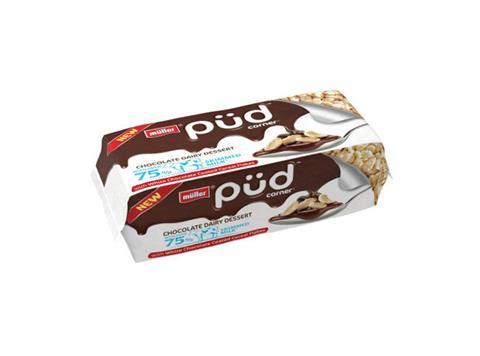 Müller is pushing its Corner twin pot range further into the desserts category with the launch of Püd, a desserts-focused sub-brand.

The new Müller Püd Corner range, a twin-pot concept, features a dairy dessert made with 75% skimmed milk and a side serving of crunchy toppings.

It is available with a choice of either apple or strawberry compote, with both varieties sold as singles, four packs and six packs (rsp: 69p, £2.69 and £3.89 respectively).

The product is the latest in a line of Greek-inspired products pushed out across Müller’s range, with the Müllerlight Fruitopolis and Greek-Style Müller Corner yoghurts launched last year.

Müller has been stepping up NPD on the back of strong performance in the UK retail market. The company ended January with a 22.7% share of the chilled yogurt and pot desserts market [Nielsen 52w/e 31 Jan].