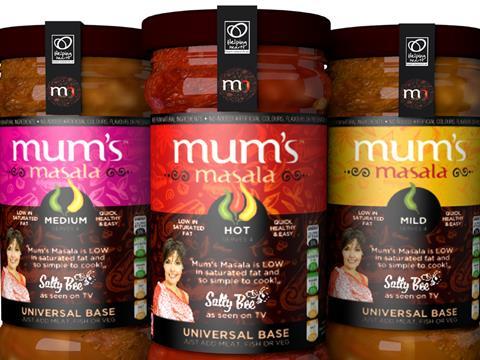 A new brand is aiming to ‘revolutionise’ Indian cooking with a range of lower-satfat natural curry bases.

Mum’s Masala, which makes its debut in Morrisons stores next week (rsp: £2.29), is made with no preservatives, artificial colours and flavours and is available in three strengths - mild, medium and hot. It can be used as the base for a range of curries.

The brand has been endorsed by celebrity chef and TV nutritionist Sally Bee, who began writing about healthy eating after suffering a string of heart attacks.

“My career is based around health so I am very careful about what I put my name to,” she told The Grocer this week. “I was amazed by the taste, but also the fact it is less processed than many sauces and lower in saturated fat and salt. I believe it can change the landscape of curry.”

The brand has also been endorsed by ­charity Heart Research UK, which described the nutritional value of the range as a “major breakthrough” in Indian cuisine.

Morrisons buyer Ashleigh Shaw said “the sauces are great for ­customers looking to lower cholesterol without compromising on taste.”