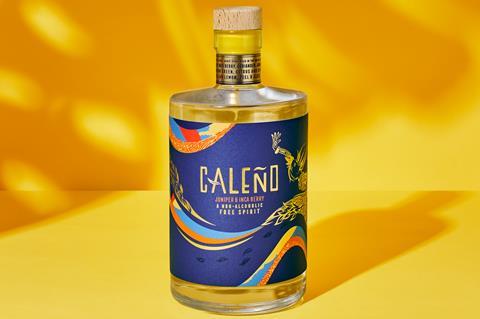 The drink is made with South American Inca berries

Colombian-inspired non-alcoholic spirit Caleño is to make its national supermarket debut in Sainsbury’s next month as part of the retailer’s Future Brands drive.

The drink is steam-distilled in stainless steel drums and billed as “a tropical infusion of juniper, citrus and spice botanicals” featuring South American Inca berries as a key ingredient, and rolls out from 3 March (rsp: £24/70cl).

The brand was founded by Ellie Webb, who formerly worked for booze distribution giant Matthew Clark, where she organised experiential trade tasting events and led the on-trade marketing campaign for the launch of Bud Light.

“I grew up surrounded by music, dancing and an upbeat Colombian culture,” she said. “This has had a big influence on the creation of Caleño, which is here to show people that you can have fun without drinking.”

Sainsbury’s has gone on a listing spree of start-up food and drink brands over the past year in a high-profile drive to differentiate itself from other retailers and lure younger shoppers.

Booze has been a particular area of focus from the retailer, with recent examples including fruit-infused craft beer brand Jubel, which launched a duo of brews onto Sainsbury’s shelves in October.