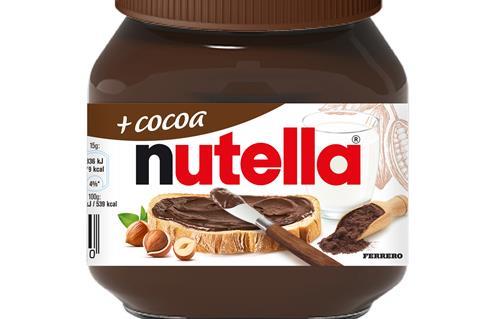 Ferrero has created a new ‘Nutella + Cocoa’ version of its long-standing spread.

The new spread has double the cocoa content of standard Nutella, and “delivers a richer and more intense flavour”, said the brand. It will roll out from spring 2020.

Fererro said it chose the UK as a ‘test bed’ for the new flavour because of the “growing trend for richer and more intense flavour variants” in the spreads category.

Taste tests with shoppers had been “really positive”, said Ferrero’s Nutella marketing director James Stewart, adding: “Our team has worked to craft the new blend of ingredients and delicious taste, in order to deliver a product that has the same high-quality experience” as the core spread.

At £2.89/350g it was priced slightly higher per kilo than the classic Nutella, which is sold in a 400g tub for the same price, said Ferrero.

Nutella is the second-biggest brand in the jams & spreads category, but its sales have slipped over the past year, falling £1.2m (2.4%), with volumes down 8.9% amid fierce competition from younger challenger brands [Nielsen 52 w/e 7 September 2019].