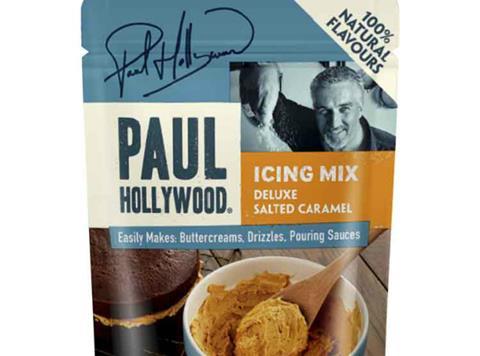 Premier Foods hopes to capitalise on Bake Off fever by extending its Paul Hollywood home baking brand in to icing.

The NPD will roll out early next month, just days after GBBO’s Channel 4 debut on 29 August with Hollywood as a judge.

They join an existing range of Paul Hollywood cake mixes that have generated more than £1m in value sales since launch in late 2015, according to Premier.

All NPD features Hollywood’s ‘top tips’ on pack, along with suggestions on how to personalise cakes.

The additions were “an exciting venture”, said Helen Touchais, brand director for baking at Premier. They offered “very high-quality, simple baking solutions, which have brought people in to the category and driven value for retailers”.

Premier’s new products come as the home baking trend is on the wane, with Brits spending £26.8m less over the past year on ingredients [Kantar Worldpanel 52 w/e 26 March 2017].