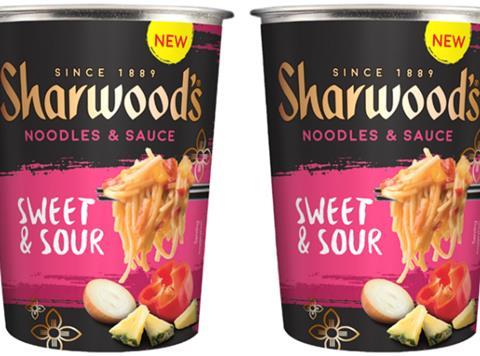 Premier Foods is cashing in on the success of its Batchelors noodle pots with the launch of a higher-end sister range from Sharwood’s.

Sharwood’s was “the number one brand in Chinese cooking sauces and accompaniments” the supplier added. This would allow shoppers to identify the new instant snacks “as a premium, flavour-packed option they can trust”.

The NPD is the latest result of Premier’s tie-up with Japanese instant noodle giant Nissin Foods. With an rsp of £1.49 for 70g-83g, it is a posher option than the partners’ Batchelors Super Noodles pots, which launched in February 2017 with a £1.09 price tag.

The Super Noodles lineup had since “exceeded expectations”, selling more than 13 million units in the mults and helping propel Premier into its strongest growth in five years, the company announced in May.

The business this week rolled out Super Noodles pots into convenience for the first time in Chicken, BBQ Beef, Curry and Bacon – offering one retailer the chance to win a branded in-store hot water station.