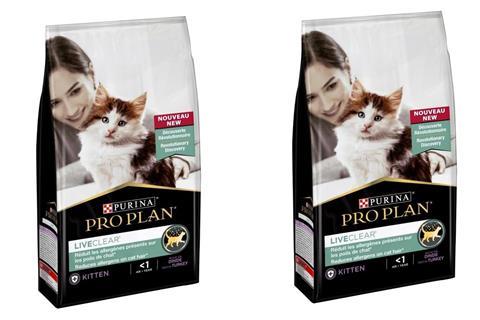 Purina has launched what it claims is the UK’s first catfood to reduce allergens on cat’s hair and dander.

Called Pro Plan Live Clear, the dry food uses protein from eggs, which coats the kibbles and neutralises the allergen in cat saliva. It means less allergen is transferred to the animal’s hair and dander when it grooms, therefore reducing the allergen in the environment.

In a study, the NPD was shown to reduce the allergens on cat hair and dander by an average of 47%, starting at the third week of daily feeding, Purina said.

The result of more than a decade of research, Pro Plan Live Clear has launched into Pets at Home as a six-strong range with variants tailored for kittens, adult cats and senior cats (rsps: £22-£36.50/1.4kg-2.8kg).

Purina said it had been dedicated to finding a “safe, effective and feline-friendly” way to address cat allergies – which affected one in five adults and last year led to 1,320 cats being relinquished by their families.

With Pro Plan Live Clear, cats and their families could be “closer than ever before” the supplier added.