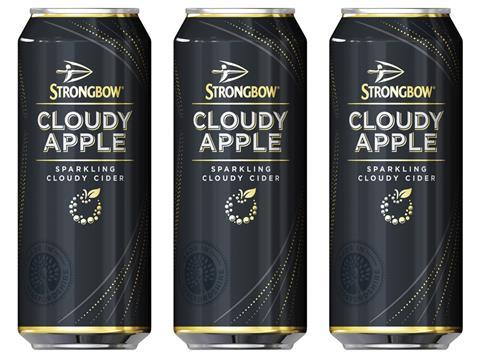 Strongbow is aiming to woo older consumers with the off-trade rollout of its Cloudy Apple variant.

With Strongbow Original targeting 18 to 24-year-olds, owner Heineken hopes the launch will help the brand retain 25 to 34-year-old drinkers and recruit new fans. The cloudy cider, made with the same apples as Strongbow Original, is sold in 600 on-trade outlets on draught after launching in May.

The launch was part of a continual evolution of the Strongbow brand, said Heineken off-trade MD Martin Porter. “We’ve spoken to loyalists who believe this is a step they would gladly take from standard Strongbow, and others have said it would be part of a much wider portfolio,” he added. “To continue to drive growth and have healthy longevity, Strongbow needs to introduce people into the marketplace who become loyalists.”

An £8m push - Heineken’s biggest-ever spend on a UK launch - will involve TV, outdoor, video, mobile and social, as well as a £1m sampling campaign with 700,000 consumers at events, transport hubs and city centres.

Recent data from Nielsen showed in the last three years, NPD contribution to the alcohol category has been dominated by fruit ciders. The single biggest launch in that period was Strongbow Dark Fruit, which is up 42.6% to £54.9m and is now the second biggest selling cider variant after Strongbow Original [Nielsen 52 w/e 25 April 2015]. Porter acknowledged there was a limit to how successful unusual fruit flavours would be in growing the category. He admitted while he fully supported Heineken’s recent launch of Bulmers Zesty Blood Orange, some observers had felt the product was taking things “too far”. “You can take the exotic varieties too far away from traditional cidermaking,” he added. “As a major player in the cider category with both Strongbow and Bulmers, we have a responsibility to drive consumers into and maintain them within apple-based cider.”

Porter added: “We think Strongbow Cloudy Apple is something that will rejuvenate the apple cider category.”