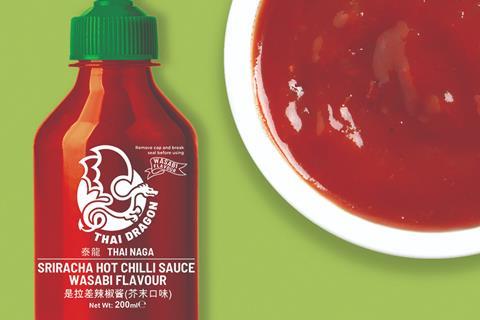 Surya debuted its Thai Dragon brand in January this year

Surya Foods has made a major play in sauces with a five-strong range of ‘Thai Dragon’ sauces.

The sauces – Original, Wasabi, Black Fire Extra Hot, Sriracha Chilli Mayo and Sweet Chilli – are packed in typical sriracha-style bottles made from 100% recyclable plastic (rsp: £1.90-£3). They have rolled into Tesco.

The NPD would tap Brits’ booming love of sriracha, said the brand, which had “already achieved cult status in the US and is now making similar ground in the UK”.

The sauce was “increasingly being served up by the world’s top chefs” and “attracting a loyal following of culinary superstars”, it said. “Sriracha has also attracted a legion of vegan fans looking to spice up dinner time.”

Surya debuted the Thai Dragon brand back in January when it opened a £2m new snack factory in Harwich, Essex, unveiling a duo of Thai cracker packs.

Surya Foods had ”moved from simple rice production to offering an impressive catalogue of leading brands from around the world” over the past 20 years, said its MD Harry Dulai.

He added it had “poured decades of expertise into Thai Dragon to bring UK consumers a genuine taste of Thailand”.