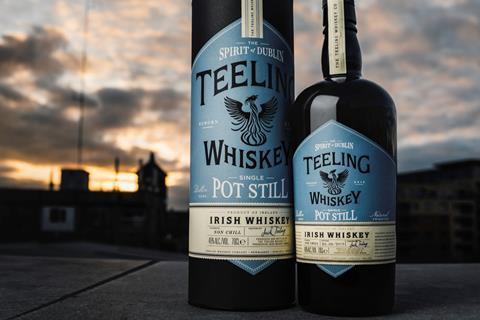 The Teeling brand debuted in Tesco, Waitrose and Asda this year

The spirit (46% abv) is made with a combination of 50% un-malted spring barley and 50% malted barley, triple-distilled and matured in a combination of virgin oak, ex-bourbon and sherry barrels. It will launch into the off-trade from the end of September (rsp: £49.95/70cl),

The liquid itself is billed as having “aromas of cinnamon on the nose with grapefruit, cream soda and roasted almonds”. “An initial white pepper flavour finds the tip of the tongue on first taste, giving way to ripe kumquats, peaches & cream and a hint of honey sweetness” and a dry finish “with a lingering spice”.

The Teeling brand was founded in 2013, and in 2015 became the first to open a distillery in the city of Dublin in 125 years.

“Our dream was to restore Dublin to its former whiskey distilling glory,” said its co-owner Stephen Teeling, adding the NPD “completes this revival, and we hope it will be just the start of a new whiskey distilling renaissance in Dublin.”

It comes on the back of several major breakthroughs for the brand, which launched its core whiskey into Waitrose, Tesco and Asda this year.