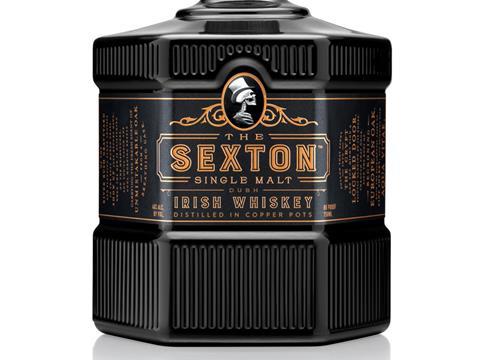 Irish single malt whiskey The Sexton is set to make its UK debut.

The 40% abv whiskey, which comes in a six-sided black bottle adorned with a skull, is triple distilled in copper pot stills and aged in oloroso sherry butts. It carries no age-statement, taking its name from the medieval word ‘sacristanus’, which means ‘a custodian of sacred objects’.

The drink is billed as being “a rich and smooth whiskey” with “marzipan, all spice and fruits” on the nose, “mellow honeyed malt and oil” on the palate and a “pleasant gentle wood finish”.

It rolls into online and specialist retailers from mid-November onwards (rsp: £30/70cl).

The Sexton was a “powerful and versatile drink”, said the brand, which “goes against the grain – designed for a new modern whiskey drinker, who looks for a multi-tasking malt that’s just as delicious enjoyed in a cocktail as it is neat”.

The Sexton isn’t the only Irish single malt available in the UK, but the market leaders – Jameson, Bushmills and Tullamore Dew – are all blended. Jameson, the largest, is responsible for the lion’s share of Irish whiskey value sales, racking up £38m over the past year [Nielsen].

Other brands are looking to muscle in on Jameson’s success, too. This week Diageo announced a major experiential marketing push for its Irish whiskey Roe & Co would kick off in January.