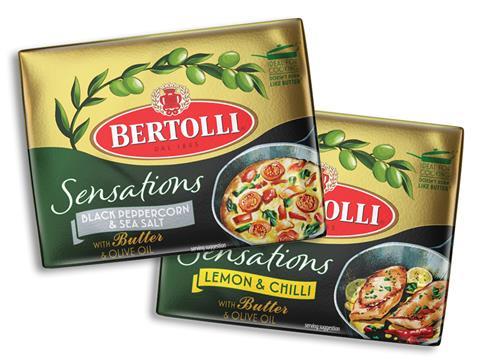 Unilever has pledged to “shake up” the chilled aisle with the launch of Bertolli’s first range of block butters.

The spreads brand is launching a 250g block of Bertolli with Butter & Olive Oil this week (rsp: £1.60). It has also unveiled a Bertolli Sensations butter in two variants: Lemon & Chilli, and Black Peppercorn & Sea Salt (rsp: £1.80).

The premium range would provide consumers with “convenient and flavoursome” cooking solutions, said Bertolli brand manager Rachel Chambers. “These new variants are designed to help beginner and experienced cooks get creative in the kitchen and experiment with new flavour combinations without the worry of burning.” The launch will be supported by a £2.5m multimedia campaign starting later this year.

It comes amid mounting speculation that Unilever is gearing up for ‘Sprexit’ with reports in mid-March suggesting the fmcg giant was exploring the sale of its spreads division as part of a business review.