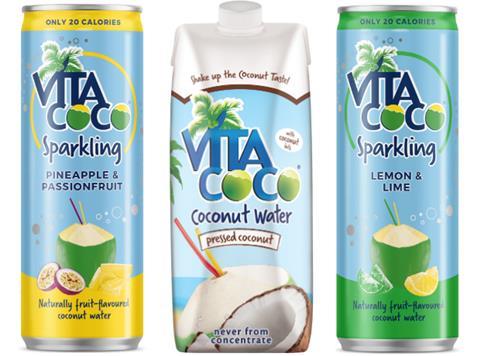 Both ranges gave already launched in the US

Vita Coco is set to expand its UK portfolio with its first blended coconut water and its debut in the sparkling drinks category.

The brand is preparing for a 1 November launch of Pressed – a blend of coconut water and coconut flesh to create a “milkier” taste and satisfy demand for different textures in the juices category.

Made in Vita Coco’s Brazil facility, the new drink had been “brewing in the pipeline for a while” said the brand’s UK MD Tim Rees. Creating a formulation that avoided clumping or separation was “actually quite hard to do”.

Pressed was originally scheduled to arrive in the UK next year, but the launch had been accelerated after the drink had “gone absolutely gangbusters” in the US since its summer rollout – proving especially popular with millennial shoppers.

“For the first time in a while, this is bringing the next generation of consumers into the coconut water category,” Rees told The Grocer.

The drink will come in a Tetra Pak (rsps: £2.49/500ml and £3.49/one litre), allowing it to be merchandised as an ambient product. Other formats including a 330ml pack would probably be introduced “down the line” Rees added.

Due to its use of coconut flesh, Pressed’s calorie content per 100ml (24kcals) is a third higher than Vita Coco’s original coconut water (18kcals).

It will be followed in January by Vita Coco Sparkling – a low-calorie, fruit-flavoured drink with a coconut water base, which like Pressed comes via the US. The UK’s initial two variants, Lemon & Lime and Pineapple & Passionfruit (rsp: £1.69/330ml), contain no more than 6kcals per 100ml. Further flavours are “in the pipeline”.

The duo would allow Vita Coco to offer a healthier option in the carbonated fruit drink space, said Rees. “We are going to disrupt the market.”

Pressed and Sparkling land on shelf after The Grocer reported in April that take-home sales of coconut water had nosedived in the UK. The category’s year-on-year value in the mults fell 12.2% to £37.3m [Kantar Worldpanel 52 w/e 25 March 2018] as other better-for-you soft drinks attracted Brits’ attention and supermarkets cut down on shelf space.