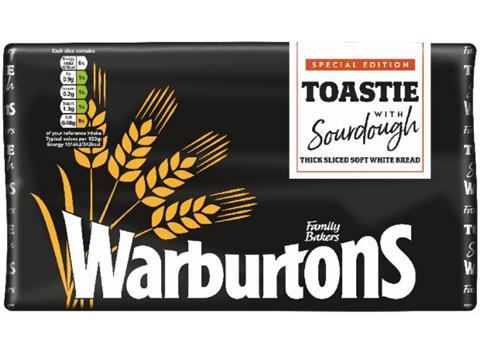 Sourdough is the second new Toastie variant of 2018

Warburtons has further expanded its Toastie range of thick-sliced bread for toasting by tapping the trend for sourdough.

Aimed at “bringing the distinct flavour of sourdough to the mainstream wrapped bread category”, the white Sourdough variant follows the February launch of a wholemeal Toastie option and the more recent introduction of Bistro Deli Buns and Bistro Brioche Buns.

The latest NPD (rsp: £1.75/800g), which is rolling out as a special edition to Asda and Iceland, was “perfect for those looking for something with added flavour, but at an affordable price” said Warburtons.

Demand for sourdough was “a trend that shows no sign of slowing down” said the bakery giant’s innovations and product marketing director Darren Littler. “This, with the quality and freshness you get from Warburtons, is perfect for people looking to try sourdough for the first time.”

In May, The Grocer revealed Warburtons’ plan to tap the rise in popularity of ‘craft’ bread by launching a trio of sourdough loaves with a price point of around £2.50. Following a £1m investment in a bakery in Milton Keynes, the company is preparing to trial an artisanal lineup in white, mixed grain and seeded variants packed in paper and film.