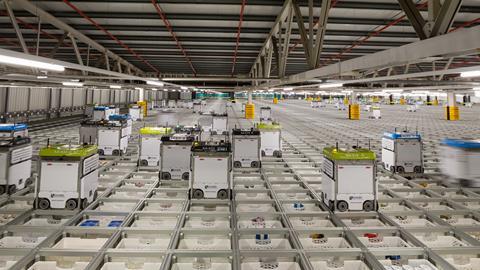 Where will Ocado Retail place its mini-CFCs?

Ocado last month unveiled a new type of customer fulfilment centre it calls a ‘mini-CFC’. It’s hardly mini: it will be located within a recently built warehouse the size of two football fields and will fulfil more than 30,000 orders per week.

Nevertheless, it will be Ocado Retail’s smallest when it becomes operational early next year. The company’s Erith CFC, by comparison, manages around 200,000 orders a week and takes up nearly four times the space.

The mini-CFC will be situated in Avonmouth near Bristol, and is unlikely to be the last of the smaller centres.

“We don’t think the mini-CFC is the answer for all scenarios, but it does work well with other standard type CFCs,” Ocado chief financial officer Duncan Tatton-Brown said last month. Future CFCs, he said, would come in a “mix” of sizes. And they are coming.

When Ocado Retail formed as a joint venture between Ocado and Marks & Spencer earlier this year, the company committed to capacity equivalent of a further eight CFCs over the next 12 years. That figure was based on a CFC the size of Ocado’s Andover site and should be taken as a “floor rather than a ceiling”, a senior Ocado source says.

With at least eight CFCs in a combination of sizes on their way, exactly where will Ocado retail place them?

Near where existing spokes are, to extend same-day delivery

Ocado works on a hub and spoke model of distribution. Its current four CFCs deliver direct to customers as well as to a network of 16 spoke sites. Those living close to CFCs can usually order in the morning for delivery later that day. But customers living closer to spokes than CFCs can typically only order for next-day delivery.

“Customers in Bristol will be able to order from Ocado’s full grocery range directly from the warehouse, as opposed to smaller spoke sites, for same-day delivery,” Monteyne says.

“By bringing the picking centre to three times more locations, it will offer that higher service level to a much larger group of customers,” he adds.

Around a third of Ocado orders are delivered directly from CFCs, the company has said. With more mini-CFCs like Bristol’s, which replace nearby spokes, this proportion will likely increase, says Brittain Ladd, chief supply chain and strategy officer at consulting firm Tompkins International.

“This is key: mini-CFCs or micro-fulfilment centres are valuable in meeting the needs of customers that want same-day delivery of groceries. As Ocado develops smaller to mid-size CFCs, they will utilise them to fulfil orders closer to the customer,” Ladd says.

Where spokes aren’t, to extend availability

Ocado says it can reach more than 74% of UK households with its current network of CFCs and spokes. That figure has been barely changed over the past decade. In 2009, when Ocado had only one CFC and seven spokes, the company claimed to service 70% of the population.

The company has tended to focus on areas where it already has customers.

“The opening of CFCs five and six [Purfleet and Bristol] is really about giving more availability, more choice, more delivery slots and better service to our customers in those markets where we already trade, rather than extending our scope of trading across the UK,” a senior Ocado source says.

“In Bristol, because we dispense with spoke sites there’s better opportunity for same-day delivery,” the source adds.

“By integrating small and large CFCs, you’re able to put down more coverage. You can be more flexible about issues of population density,” the Ocado source says.

Near highly online and affluent areas

“Online shopping is big in Yorkshire and the Humber. York could be a good site from which to serve Sainsbury’s shoppers that can be convinced to trade up. The Bristol one is a clever move. In Wales, online shopping is growing quickly in popularity: another CFC could be certainly be established there,” Brereton says.

“There is scope for them to move further into the south west – somewhere like Exeter. It’s at the national average for online shopping, and Waitrose has quite a big grip on there so with the change of supply, they might try and take those customers with them,” he adds.

Andy Halliwell, senior director of retail at digital consultancy Publicis Sapient, says it makes sense for Ocado Retail to deploy the mini-CFCs in locations “which have high rents and dense urban populations or more affluent customers, which are more likely to want groceries delivered and pay the premium that comes with M&S and Ocado”.

“On the basis of that, I believe the areas like Manchester, Liverpool, and the south east of England are the obvious candidates for these types of installations. Areas like Oxford, Cambridge and Peterborough, which over-index with these types of audiences and have high numbers of M&S food stores, would make good targets as well. And looking further north, Edinburgh and Leeds may also make sense,” Halliwell says.

Many analysts expect small-size CFCs to be installed in London. These could be modelled after the ‘micro-CFC’ in Acton, which serves the company’s one-hour grocery delivery service Ocado Zoom.

Brereton agrees: “I can see Ocado adding one or two of the mini-CFCs around London and trying to expand their Ocado Zoom proposition.”

Ocado has hinted as much. Questioned directly about more ‘micro-CFCs’ to serve its one-hour grocery delivery service Ocado Zoom last week, CFO Tatton-Brown said: “I won’t put a number or timing on that. Rest assured the trial is going well. So, you should read from the tone that we’re likely commit to more.”