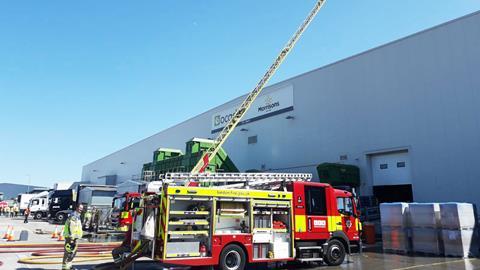 Some argue the latest episode shows lessons have been learned

A collision between three robots at Ocado’s Erith CFC last Friday sparked a blaze that took 100 firefighters more than 12 hours to tackle.

As a result, thousands of orders have been cancelled or delayed as they are diverted to other CFCs. “It’s proving tricky to manage the extra demand,” Ocado told customers in the south east on Monday.

The retailer says operations at Erith will be “up and running in the next week” though “it may take a little longer to be at full service”. Disruption will be “short term” it added.

But it’s the long-term impact causing the most concern. The latest incident marks Ocado’s third fire in three years. In 2019, an electrical fault at a battery charging unit sparked a blaze that ripped through Ocado’s Andover facility, sending 10% of the retailer’s overall capacity up in smoke. Later that year, another broke out in a container for waste packaging at Erith.

There are fears the latest such incident could cause significant reputational damage. “Ocado’s partner acquisition was slowing down even prior to this fire,” says Rueben Scriven, senior analyst at Interact Analysis.

“Not only does Ocado have to convince retailers of the centralised model of fulfilment, it now has to convince them on the safety and functionality of its tech.” Potential buyers will “certainly think twice” as a result, he suggests.

Those concerns were reflected in Ocado’s share price plummeting 2.6% to its lowest value in more than a year at the start of this week. Russ Mould, investment director at AJ Bell, says this is down to the long-term outlook more than the immediate impact. “This has disrupted trading for its UK operations but perhaps is more damaging to its reputation, as it is trying to convince grocery providers around the world to sign up to its technology platform,” he says.

Neil Wilson, chief market analyst at Markets.com, reiterates those fears. “The main thing investors are concerned about is the safety of the technology – will this be repeated? It is only two years since the Andover facility burned down. Will this have an impact on future deals with international partners?”

It might. But some argue it could also reassure potential partners over the measures Ocado has put in place since Andover. Thanks to “fire attenuation measures” in the wake of 2019’s disaster, the damage caused by the latest fire “was limited to a small section of less than 1% of the grid” Ocado says. By comparison, the Andover CFC is still not rebuilt and the incident sent shares down around 15%.

In other words, even a significant incident can now be brushed off in weeks.

“After the Andover fire, Ocado learned some valuable lessons in how to manufacture their space, racking and robotics to ensure fires were less likely in the first place, were less likely to spread when they happen, and to help minimise damage to the rest of the infrastructure in a worst-case scenario,” says Andy Halliwell, senior director of retail at Publicis Sapient.

The company looked to other industries – like high-performance data centres – to “understand what needed to change”, he adds.

It is likely Ocado was pushing bots to their limits “trialling a new routing algorithm or testing the maximum speed” suggests Scriven. The company would make any of these new functions safe ahead of an update rollout to customers, meaning a similar incident in a partner facility would be unlikely.

“At the end of the day, we’re talking about new technology, so we can expect such incidents to occur during the process,” says Neil Jordan, principal consultant at procurement and supply chain consultancy Proxima.

As grocery automation expert Brittain Ladd puts it: “The tech isn’t dangerous, it is merely going through growing pains.”

The fire won’t slow down sales of Ocado’s fulfilment solution because “Ocado offers such a different business model and technology”, he adds.

So although it has caused temporary disruption to Ocado’s operations and inconvenienced its customers, the latest smoke cloud could have a silver lining.

Ultimately, argues Halliwell, “this is good news for Ocado in some ways as it demonstrates when the worst happens, their equipment is now hardened against these problems”.