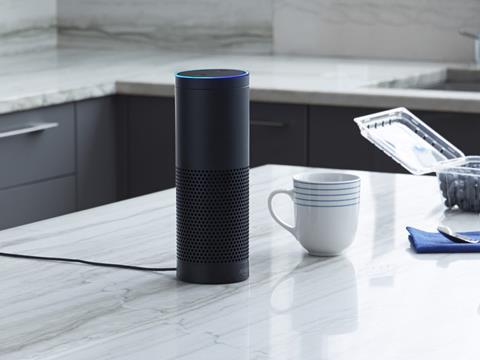 Amazon has patented a ‘voice sniffer algorithm’ which could allow its Alexa voice assistant to make product recommendations after listening to conversations.

The recently granted US patent describes an algorithm capable of making recommendations or targeting advertising based on conversations overheard by smart speakers.

“If the user mentions how much [they] would like to go to a restaurant while on the phone, a recommendation might be sent while the user is still engaged in the conversation that enables [them] to make a reservation at the restaurant, or provides a coupon or dining offer for that restaurant,” the patent says.

It describes the algorithm as being capable of recognising “trigger words” such as “love” and using them to identify people’s interests.

“For example, in sentences such as ‘I love skiing’ or ‘I like to swim’ the words ‘like’ and ‘love’ could be example trigger words indicating a level of interest in particular topics, in this case swimming and skiing,” it says.

It also proposes timestamping the data to keep it up to date and relevant. “For example, a teenager might change musical tastes relatively frequently, such that it is desirable to ensure recommendations represent the teenager’s current interests in order to improve the performance of the recommendations.”

Amazon’s Echo smart speakers are currently in around 8% of UK homes, according to recent research from consultancy group OC&C.

The devices don’t send information to the internet until activated by a “wake word” such as ‘Alexa’.

Amazon said in a statement: “We do not use customers’ voice recordings for targeted advertising. Like many companies, we file a number of forward-looking patent applications that explore the full possibilities of new technology. Patents take multiple years to receive and do not necessarily reflect current developments to products and services.”