Amazon patents drones that can differentiate between friendly and angry gestures 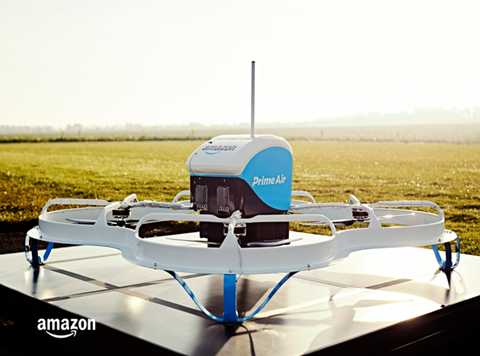 A new generation of Amazon delivery drones could soon be able to tell the difference between someone waving welcomingly and angrily, and land or abort accordingly.

A patent filed by the tech giant describes a drone that can recognise gestures such as ‘waving of one’s arms aggressively in front of one’s face, covering of one’s head with one’s arms, moving one’s arms in a shooing fashion’ resulting in it ‘aborting its delivery plan’.

Less hostile gestures such ‘waving of one’s arms in an inviting manner, pointing at particular location(s)’ may lead the onboard computer to tell the drone ‘to land, deliver its payload, or in some way interact with the human making the gestures’.

The patent, granted in the US with regard to ‘human interaction with unmanned aerial vehicles’, says the drones could also respond to ‘audible gestures’. It includes a cartoon sketch of a man waving, with some vigour, at a drone.

Amazon’s future Prime Air delivery service, which could play a role in its expansion into grocery, aims to get packages to customers in under 30 minutes using drones.