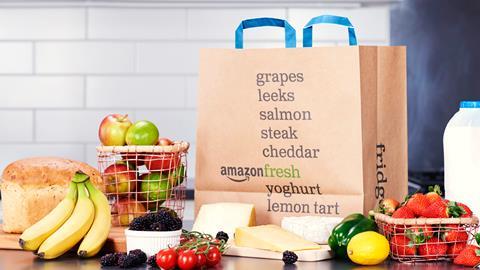 Can AmazonFresh really crack the online grocery market in the UK?

Trying and testing is part of Amazon’s, well, tried and tested strategy. Jeff Bezos is famously averse to big bang launches. Instead, he prefers to start small and hone the proposition.

AmazonFresh is a case in point. The online grocery service made its UK debut in just 69 London postcodes. Since then, it has steadily gained ground to over 300 postcodes, venturing outside the capital to the realms of Hertfordshire and Bedfordshire. Still, it essentially remains a tiny grocery service in the south east. But if reports in this weekend’s Sunday Telegraph are to be believed, that may not be the case for long.

According to the story, Amazon has grown its Fresh team substantially over the past year in various locations – suggesting a further rollout may be on the cards. Typically, Amazon has declined to confirm or deny the suggestion. Still, if there is any truth to the rumours, Amazon may have a fight on its hands.

The behemoth has played its cards characteristically close to its chest when it comes to the financial success of Fresh. Looking from the outside, the proposition seems to have proved a challenge in the US. In 2017, it emerged Amazon was scaling back its Fresh grocery delivery service in areas including New Jersey, Pennsylvania, Delaware and Maryland. The news was made all the more surprising considering it had recently acquired Whole Foods Market.

Read more: Amazon is Go - but will the concept really work in the UK?

Arguably, it could be easier to make AmazonFresh work in the UK. We have a denser population better suited to the logistical challenges of online delivery. We are also a nation that has come round to the idea of buying our food without seeing it first in store. Online accounts for more than 7% of grocery spend in the UK, according to Kantar Worldpanel, which tips that figure to grow to 12% by 2025.

But the UK’s familiarity with online also presents a downside. When AmazonFresh made its debut here in 2016, the UK was named the third largest online grocery market in the world by Kantar Worldpanel. That was thanks to the quality of the existing online offerings. Tesco and Sainsbury’s offer both same-day and one-hour orders – slots that are booked further in advance can cost as little as 50p – while Ocado has just dipped its toe into the 60-minute delivery waters. In this environment, Amazon’s speed and agility is hardly a USP. Add to that an extra element of rigidity – AmazonFresh requires a £3.99 monthly subscription fee on top of Prime membership to cover delivery costs on orders over £60 – and the proposition seems less than compelling.

Granted, AmazonFresh has other selling points. It has made some noise about how cheap it is on brands, but that hardly seems enough to tempt its target well-heeled clientele. More of a draw are its foodie partners that aren’t available elsewhere online. That includes Whole Foods and Booths, but also specialist independents such as C Lidgate butchers and Gail’s Artisan Bakery.

Still, these specialists are largely London-centric. To move outside of the south east would present a whole host of logistical challenges – not least finding a suite of new partners. So if the rumours are to be believed, Amazon is likely to face hefty challenges cracking the UK online grocery market.

But if there’s one thing you can count on with Amazon, any decision will have involved plenty of trying and testing.