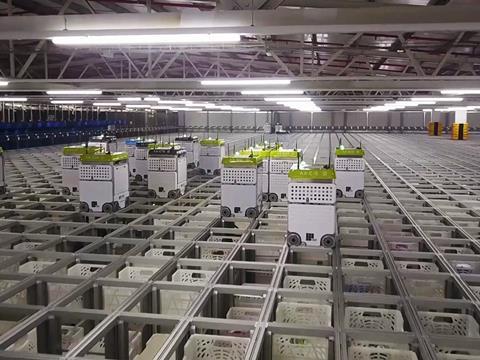 Ocado (OCDO) has signed a tie-up with Sweden’s leading grocery retailer, ICA Group, which has about 1,300 stores.

The deal will be exclusive to ICA in the Swedish market as long as ICA meets certain pre-agreed growth targets.

It would build Ocado’s latest generation, state-of-the-art automated warehouse designed specifically for grocery ecommerce, in which Ocado would invest to install internal infrastructure and robots.

Ocado said it was adapting its model to suit the needs of a different business model, based on retailer-owned stores, demonstrating the adaptability of the platform.

The model would enable the independent retailers to continue to compete, which had been instrumental in making ICA one of the most successful grocery retailers in the world, it said, while delivering the benefits of scale of Ocado’s centralised fulfilment model. The platform was expected to be implemented by the end of 2020, Ocado added.

ICA and Ocado would develop their first customer fulfilment centre (CFC) in the Greater Stockholm area which was is expected to take about three years to build. ICA would also transfer its store-pick based operations to Ocado Smart Platform.

Ocado said the partners would consider developing other CFCs elsewhere in Sweden. Ocado would provide a comprehensive and customised suite of support and engineering services to enable a smooth launch and sustainable ecommerce operations.

ICA and Ocado would also partner to incorporate ongoing learning and innovation from Ocado’s global experience into the Swedish business. ICA would pay Ocado certain upfront fees upon signing and during the development phase, then ongoing fees linked to both sales achieved and installed capacity within the CFC and service criteria, Ocado said.

It said it expected the deal to create “significant” long-term value to the business. The impact should be earnings neutral in the current financial year. It expected minimal additional capex in FY18 but extra capex in future years as development of the CFC project got under way.

Luke Jensen, chief executive of Ocado Solutions, said: “We are excited and proud to be partnering with another of Europe’s leading grocery retailers. ICA has a strong track record of growth and innovation and our Smart Platform will give the ICA-retailers the opportunity to provide their customers with new levels of service, convenience and value.

“Our flexible, scalable and modular solution is uniquely positioned to address a fresh set of challenges and allow ICA deliver its ambitions for online.”

Per Strömberg, chief executive of ICA Group, said: “We are now laying the foundation for the next generation ecommerce offering, and we are putting an important piece of the puzzle in place to realise our digital ambitions for all of ICA Group. Today we have the industry’s most efficient processes for physical shopping, and through this agreement we can create the most efficient solutions also for ecommerce.”

“At the same time, we will benefit from the fact that Ocado are continuously developing the platform for themselves and other leading grocery retailers around the world. An automated ecommerce warehouse will enable us to offer customers a wider product range online and better deliveries while at the same time streamlining ICA’s logistics flows.”

PZ Cussons (PZC) has announced that Tamara Minick-Scokalo and Dariusz Kucz have joined the board as non-executive directors.

Kucz is chief top line officer of Haribo, the international confectionery company, leading its global commercial operations. He has previously held senior leadership roles at Danone, where he led the baby food business in Asia Pacific, and Wrigley, where he was regional vice-president, Central and Eastern Europe.

She was regional president, growth markets for Pearson until 2016, with responsibility for emerging markets. She is a non-executive director of Amer Sports, OHorizons, Let’s Go Crazy Holdings and Mustad Hoofcare.

Caroline Silver, PZ Cussons chair, said: “I am delighted to announce the appointment of Tamara and Dariusz to the Board on 1 May. They both have deep FMCG experience and knowledge of many of the company’s key markets which will be of great value to the board.”

British American Tobacco (BATS) has reissued its results for the half-year to 30 June 2017 to “provide a consistent basis for the organic performance measurements of the group for the six months ending 30 June 2018, including a representative comparator base inclusive of the 2017 acquisitions”, it said.

The tobacco group said for the six-months ended June 2017, while not part of the Group’s KPIs, to provide the comparator against which 2018 would be measured, revenue of its strategic portfolio was £3.57bn –including the impact of IFRS 15 which was effective 1 January 2018 with retrospective application – or £8.12bn including six months revenue from acquisitions including the US business.

Dirk Van de Put, chairman and chief executive, said: “We had a good start to the year with improving top-line momentum and continued progress in margin expansion driven by strength in Europe and AMEA.