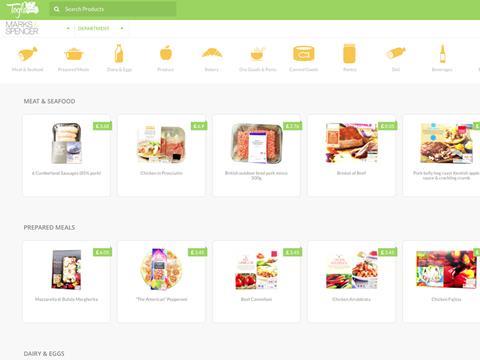 The site, which started delivering groceries to households in Chelsea and Kensington within 40 minutes in July, is no longer accessible. Togle’s Twitter account has been inactive since October.

Togle is still listed on Companies House and, following a change in premises and the resignation of co-founder Dinmukhamed Abilov in June, Abyl Ikhsanov is still active as sole director. Ikhsanov did not respond to The Grocer’s requests for comment.

The company started out delivering M&S food at a markup of around 15% on in-store prices plus a £4.50 delivery fee. At the time of the launch, Togle was promoted by independent bloggers and the company offered a £10 discount to new customers, on top of the chance to win rewards such as a flight to Miami for making referrals.

Similar to Togle, the service works by charging a mark-up on products and a flat delivery fee of £4.99. The premium for most items is between 10% and 15%, but ranges such as Essential Waitrose and Tesco Everyday Value are the same price as in-store, and the company hopes to eventually abolish mark-ups altogether.

Founder Takis Malavetas said orders were growing at a rate of around 30% to 40% per month, and Tesco orders had tripled since it added the supermarket to its offering in January.

“This industry is extremely hard and not for faint-hearted,” he said. “But if you do the right things there is plenty of potential.”