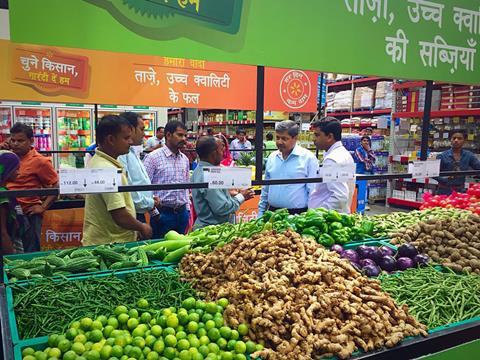 It’s been great to see two of the American grocery giants, Walmart and Kroger, mobilising themselves to come to grips with the digital imperative that every retailer faces today. They are recognising that to be relevant going forward they have to be omnichannel – that is, to have a consistent digital connection to the consumer across all sales channels.

I think the deal Walmart struck to take a majority stake in Flipkart, India’s biggest ecommerce player, is a good move for two reasons. One, it’s good that it’s competed with Amazon and won, and it’s a clear sign to me it recognises how ecommerce is going to be a critical part of the future. Two, it hasn’t got a store network in India, but it can be a major player there via this route – maybe not in five years, but perhaps in 10 or 15.

Then there’s Kroger’s partnership with Ocado. I’ve got to declare my interests here, as one of the founding fathers of Tesco.com in 1995: I have believed for over 20 years that internet-based provision of grocery is something that consumers want. If your strategy is to make sure you have the format consumers want, and you also want to be a growing business, you have to be in growing sectors - and the only growth sectors in grocery for quite some years now have been either online or discount.

Now, I’ve never liked the fact that some in the industry maintain nobody ever makes any money out of ecommerce, and I’m absolutely delighted to see Kroger making this move. It’s brilliant to see Kroger be daring and commit to rolling Ocado’s supply chain technology out to potentially 20 warehouses across the US, which means it’s really going to take this seriously.

It is also a delight that all the shorters and naysayers, who said Ocado was not worth anything, have taken one in the eye and felt it in the money clip. It has never made any sense to me how Amazon is so revered, feared and valued in the US and that we have Ocado, which is the grocery equivalent of Amazon, and we’ve thought of it as an embarrassment.

Food accounts for nearly 40% of all global consumption as the largest single retail sector, and Amazon does not have a solution. It bought Whole Foods, which may give it one, but it doesn’t  yet have a solution in grocery, whereas Ocado does. Amazon gets all the credit for dominating other sectors, and Ocado gets none. Fortunately for Ocado’s patient shareholders, they have been rewarded for ignoring a load of carping of “this is all jam tomorrow”.

It was also interesting to see that, within the same week of the Ocado deal, Kroger acquired the Chicago-based meal kit provider, Home Chef, to rival the likes of Blue Apron, HelloFresh and Gousto. Once again, this shows how much Kroger is getting on with it and considering different digital offerings and channels to address its market.