Ocado teams up with Amazon for Alexa voice ordering app 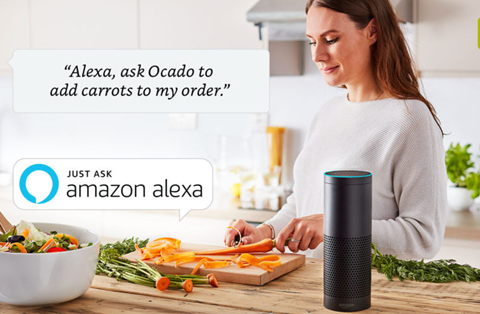 Ocado has jumped into bed with its hottest rival by creating a voice ordering app for Amazon Alexa.

From today, customers will be able to use Amazon’s voice command devices to add a product to their Ocado basket, find out which products are in season, search recipe ideas and keep track of their order.

The Ocado app for Alexa is programmed to respond to simple commands such as “Alexa, ask Ocado to add coffee to my order” or “where’s my order?”.

By asking “what’s in season?”, customers will receive a list of seasonal products in stock and can access recipes that include the ingredients.

The app recognises the 15,000 most commonly searched terms on Ocado’s site and uses an AI-based algorithm to suggest the product customers are most likely to want.

The algorithm primarily uses past shopping behaviours to inform suggestions. For example, if a customer asks for cheese, it will select the brand that appears in their favourites list.

However, it will also have the power to make alternative suggestions when the product is not available. If a customer’s preferred brand of cheese is out of stock, it can ask: “How about trying the Ocado organic mature cheddar instead?”

The innovation will make Ocado the second food retailer in the UK to use voice technology on a widespread basis, after AmazonFresh linked up with Alexa earlier this year.

In March, Tesco began a trial partnership with the Google Home assistant.

Voice command devices are forecast to boom following the launch of Google Assistant earlier this year, with Apple expected to bring out its own device by the end of 2017.

Voice search already accounts for 20% of all digital searches, including searches from smartphones, according to Google.

Ocado said its research showed “many customers” wanted to use voice-controlled devices for grocery shopping.

“Grocery shopping should be quick, easy and convenient,” said Ocado’s marketing director Lawrence Hene. “Using voice technology, we’ve made it even easier by developing our new app that will enable our customers to add to their Ocado baskets without lifting a finger.”

Ocado’s chief technology officer Paul Clarke said he was “incredibly excited” about internet of things technology. “I think most companies are asleep to just how disruptive that will be,” he said. “I think it will dwarf what happened with the mobile phone revolution.”