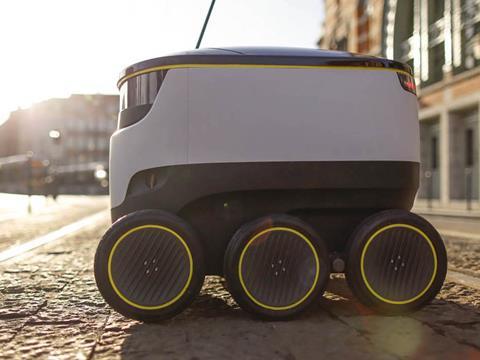 Tesco customers can order groceries for delivery by robot for the first time using a new service in Milton Keynes.

Tech startup Starship Technologies, which already delivers for a Co-op branch in Milton Keynes, is now offering the same service from a Tesco Extra in the town’s Kingston Centre.

Using Starship’s smartphone app, customers can order Tesco groceries for delivery in as little as 15 minutes within a two-mile radius of the store. They pay usual shelf prices for products and £1 for delivery.

Starship performed a one-off Tesco delivery in London in 2017 for publicity but this is the first time customers have been able to use the service. Over a thousand Tesco products are listed on the app.

The US-based robot business has been delivering for the Co-op’s Monkston branch since April last year, with Tesco only the second supermarket to be added.

“Obviously Tesco coming on board is a fantastic addition to the offering for residents in the local area,” said Harris-Burland.

“This is the first time customers can order from Tesco and receive robot delivery anywhere in the world.”

Orders are picked in store by Starship workers and placed in the robots, which use cameras and sensors to make their unaccompanied journey to the customer at about 4mph. The shopping goes in a locked compartment which the customer can open using the app.

Starship has also just added a streamlined ordering feature called ‘Snap’ to its app, allowing customers to add their favourites to a basket in one tap.

“Snap learns your shopping habits through your past orders and puts the items that you frequently buy into an Instagram-like grid where you tap once to order,” said Harris-Burland.

San Francisco-headquartered Starship aims to deploy its robots in towns across Europe and the US. Harris-Burland said an announcement on the geographical expansion of the Milton Keynes operation, the only current UK location, was due soon.

In October the firm launched a last-mile delivery service for orders from any online retailer. Customers are asked to have their parcel sent to a Starship address and then contact the firm to arrange delivery at a time that suits them.

Last week PepsiCo announced the launch of deliveries of snacks to students using similar autonomous robots at the University of the Pacific in Stockton, California.