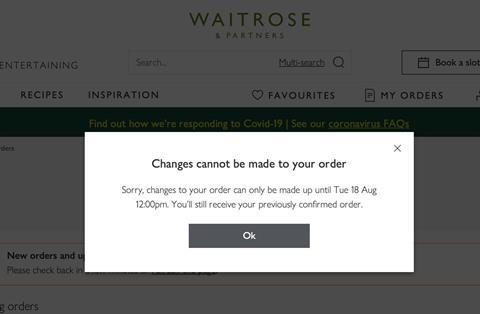 Some customers have been unable to login or amend their orders

One customer said they spent over an hour trying to get through to Waitrose’s customer service team on the phone to discuss the issues, while others could not cancel or change orders.

As Waitrose requires customers to make final amendments to their basket by midday the day prior to their delivery slot, some shoppers ended up having incorrect or unwanted orders delivered.

This came alongside some shoppers having trouble checking out their grocery orders altogether.

Waitrose initially told customers on social media to delete their cookies and use an alternative browser to access their website, adding that it had experienced high volume traffic recently. This was followed by a response stating it had been resolving some IT issues that were impacting a “small percentage of customers”.

A spokeswoman for Waitrose told The Grocer: “Due to continued high demand for Waitrose.com, some customers experienced a temporary glitch for around one hour on Thursday morning – this is now fully resolved. We’re sorry for any inconvenience this may have caused.”

This comes ahead of Waitrose’s split from Ocado after a two decade-long partnership. From 1 September, online shoppers will only be able to purchase Waitrose grocery products from Waitrose.com or through its app.