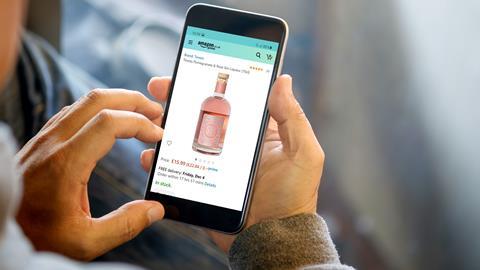 Why is Amazon suddenly seeing big growth in booze?

The online titan has been laying the groundwork for some time

It’s no surprise supermarkets have sold a lot of booze in the pandemic. So too online operators like Naked (up 80% in the first half of FY21) and regular off-licence chains. But the highest growth (at least in percentage terms) has been Amazon, which more than doubled its booze sales in 2020.

Analysis by Profitero shows a 121% increase this July to October compared with last. How has Amazon done it?

While the incline in sales is steep, those who have watched Amazon may not be surprised. Far from being a “sleeping giant”, it has steadily been stretching its tentacles into booze – particularly spirits, where much of the growth lies – for some time. And not just by the aggressive pricing, which Profitero found had undercut Asda and Tesco by up to 11%.

For instance, Amazon has been differentiating via exclusive partnerships and bottlings. For Christmas 2018 it launched unique whiskies from Highland Park and Bowmore through a tie-up with Edrington Beam Suntory. It was also the first retailer to sell Diageo’s Game of Thrones licensed Johnnie Walker whisky.

It’s also launched a compelling and competitively priced own-label offer. October 2019 saw the debut of its first own-label gin, Tovess, a brand that has since expanded into whisky, gin, rum and vodka.

Once-hesitant suppliers are recognising the opportunities. “They have certainly improved their ability for brands to represent themselves with a lot of the advertising tools they are rolling out such as store-fronts, video displays and branded content,” says Elliott Hawkins, founder of Nomaza, a consultancy that helps fmcg brands deal with Amazon.

Being able to seed a drink into the market without having to wait out range review cycles is a huge draw, adds spirits brand British Honey Co commercial director Oliver Williams.

“If you have a product you’ve created and has passed all the regulatory requirements, you immediately have a platform for that product. Whether you have a market or not is a different story, but having a place to test pilot and sell in the weeks after a launch is pretty amazing.”

Even big names are prioritising Amazon as a first call for more experimental NPD. Bacardí debuted its Twistails range of Nespresso-style cocktail pods through Amazon in November.

British Honey Co has just launched a range of “affordable luxury” spirits exclusively into Amazon, which it says would not have been financially viable in traditional retail.

Selling direct via Amazon “makes it easier to get to that accessible price and hit new markets,” says Williams. That’s not to say it’s without its challenges. “It can be a bit of a struggle for smaller businesses because of the software and shipping requirements to get Seller Fulfilled Prime status.”

Another problem, says Hawkins, is that while the number of listed brands has grown, “the real estate through which brands and customers transact, such as phone screens, has not got any bigger”.

This means in some categories “we may see 50% of all the clicks going to the first three listings of search results, and 70% of shoppers never leave the first page of results”. As more brands compete for sales and top search rankings, so the difficulty and cost of doing business successfully on Amazon increases, he adds.

Still, Profitero predicts no end to Amazon’s alcoholic winning streak, especially with a Covid Christmas on the way.