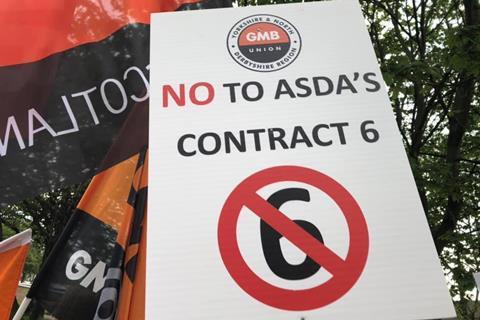 The union has announced protests to be held at Asda stores in Edgware, Wembley, Park Royal, Lowestoft, Great Yarmouth and Norwich

Union leaders have announced a series of further protests against a controversial pay deal for Asda staff, due to kick off tomorrow (5 September).

GMB London Region said it would be holding a number of demonstrations this month across London and the east of England in protest against so-called ‘Contract 6’.

In April, the supermarket announced it was raising minimum hourly store wages but scrapping paid breaks, in a move it claimed would benefit most staff but leave around 3,000 of the 60,000 affected worse off.

The plan to move hourly paid retail staff in England, Scotland and Wales to new contracts that raise the lowest rate from £8.21 to £9 but require “more flexibility” over hours and departments has already prompted a mass demonstration at its headquarters in Leeds last month.

The GMB said the flexible contract gave the company the ability to change the number of staff working days, hours and their department with just four weeks’ notice.

The union has now announced protests to be held at Asda stores in Edgware, Wembley and Park Royal tomorrow, followed by further demos at Asda branches in Lowestoft, Great Yarmouth and Norwich on 16 September.

“They would be spinning in their graves now.

“Asda’s workers have received letters from Asda saying they’ll be sacked in 12 weeks’ time unless they sign this punishing new contract.

“The new contract, Contract 6, allows Asda to change your pay, terms and conditions, without consultation or agreement. This gives workers no security.

“Loyal Asda colleagues are being rewarded with cuts to terms and conditions, face giving up work to look after elderly or disabled parents and relatives, and single parents may sacrifice their only source of income.

“Members are also reporting bullying and pressure being applied to force them on to the new contract.

“GMB have made it clear to Asda that it’s not good enough and it’s not acceptable. Asda is a multi-billion-pound company. It doesn’t have to do this to its workforce.

“I would welcome all Asda colleagues to join GMB at the stores listed above so that we can continue to challenge this unfair imposition of Contract 6 and the degrading of workers terms and conditions within GMB London Region.”

An Asda spokesman said: “The retail sector is immensely competitive and it is important that we are able to serve our customers in the best way to meet their needs. This contract is about increasing the take-home pay of more than 100,000 retail colleagues, through an investment of more than £80m, and ensuring that everyone doing the same job is on the same terms and conditions. “The overwhelming majority of our colleagues from across all of our stores, including in London, have signed on to the new contracts and while we appreciate that some of our colleagues find the changes more unsettling, we do not want any of them to leave.

“We understand colleagues have commitments outside of work and will not be asking them to constantly move the time they work, their days or departments.”