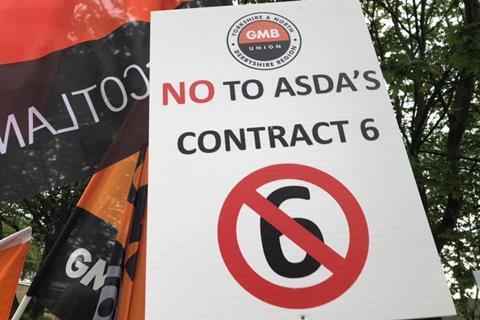 Trade union GMB is staging a protest outside Asda’s Leeds HQ today, as it steps up its battle against controversial changes to staff pay.

The union is fighting against proposed changes to the terms and conditions of more than 68,000 Asda workers’ contracts across the country.

At the protest, it said any such move should be based on seeking a collective agreement, not an imposition that will force thousands of staff to lose holidays and bonus pay.

The union claimed Asda had told colleagues unwilling to accept the proposed contract that they would potentially be served notice of their current contract and offered re-engagement on the new terms to take effect at the end of the notice period. Should they not accept the new terms, they would then be dismissed, GMB said.

Last month, Asda announced it was raising minimum hourly store wages but scrapping paid breaks. It claimed this would benefit most staff but leave around 3,000 of its 60,000 affected employees worse off.

The union is protesting against the moves, which include changes to paid meal breaks, the loss of hours, changes to the night shift window and a flat rate for bank holiday work.

The new flexible contract also means the company has the ability to change the number of staff working days, hours and their department with three weeks’ notice.

About 50 GMB London Region members joined 50 members in the Yorkshire Region at the protest, as well as those from other GMB regions, holding placards and banners calling for “an end to Asda retail poverty”.

GMB regional organiser Keith Dixon said: “We do not believe that threatening colleagues with dismissal is the right way to start discussions about introducing a new contract.

“Colleagues cannot believe Asda is taking this approach. Other employers may have gone down this route, and to their cost, but Asda colleagues expect more from Asda.

“Colleagues are shocked and angered by the way this has been briefed out at store level. Colleagues report that if they don’t sign they will be resigned, dismissed in 12 weeks, no flexibility, no job, termination, no redundancy; the list goes on.

“Comments like this do not give colleagues confidence in a flexible contract with a three-week notice clause. The overwhelming view is that this will be abused.

“The view of GMB members is that Asda should be doing this differently. This is not in the spirit of partnership working. When GMB surveyed Asda colleagues recently over the merger, 94% called on Asda to negotiate pay and conditions with GMB.

“We believe Asda should be sitting down with GMB and negotiating.

“We believe Asda should be seeking a collective agreement not imposition.

“The GMB will fight any imposition of the new contract.”

An Asda spokesman said: “We are currently consulting with our colleagues and their representatives over a proposal to invest in an increased rate of pay and changes to terms and conditions, which would enable us to deliver better service to our customers in an intensely competitive marketplace and would make 95% of our colleagues financially better off. This consultation is ongoing and we will always have conversations about change with our colleagues first.”