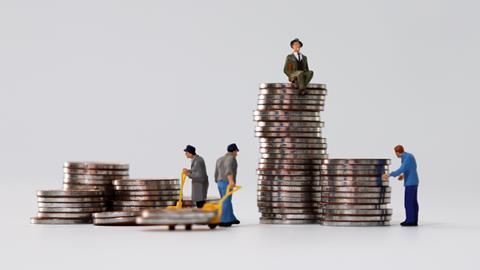 Will coronavirus put supermarket pay on a more equal footing?

Supermarkets have rewarded frontline staff with boosts to pay, while some have pruned back exec bonuses. Is the future more equitable?

What do Beyoncé, Emma Watson and Victoria Beckham have in common? They’ve all graced the cover of Vogue, that’s what. Now there is one lesser-known person who can add their name to that list: Anisa Omar. Her claim to fame? She’s an assistant at the King’s Cross branch of Waitrose.

Her appearance on Vogue’s June issue – one that featured a London Overground train driver and a midwife on its two other covers – marks a sea change in attitude. Celebrity status is no longer the only thing that counts. Instead, key workers are being celebrated as the real heroes, as Britain continues to grapple with the impact of Covid-19.

That means a massive change in perceptions of supermarket workers. “The whole of society has recognised who the key workers are,” says Roger Jenkins, national officer at GMB. “When the world comes to a stop, we need people supplying food.”

The supermarkets have recognised that crucial job with a host of bonuses and one-off increases to pay. But unions argue they need to go one step further. Having proved themselves during the pandemic, staff should get higher rewards on a more permanent basis, they argue. And that could be funded by pruning back the excesses of exec pay.

Indeed, as businesses propagate the ‘we’re all in this together’ mantra, huge levels of disparity in pay are set to become harder to justify. So could we see a Robin Hood style shake-up of pay that takes from the board to gives to the shop floor?

How much do supermarkets pay their staff?

How are supermarkets protecting and supporting their staff during the coronavirus crisis?

One thing is for sure: high levels of executive pay are already stirring up greater levels of controversy. At the end of last month, Tesco faced one of the FTSE 100’s biggest-ever revolts against its remuneration policy, which saw CEO Dave Lewis pocket a cool £6.4m – the supermarket’s highest annual pay packet in a decade.

It’s not the only one facing a backlash. Sainsbury’s attracted criticism for handing almost £2m in bonus shares to its senior executive team less than a fortnight after deferring its final dividend. And Morrisons came under fire for proposing a 24% pension contribution rate for CEO David Potts and COO Trevor Strain, compared with the 5% given to the rest of the workforce.

Bear in mind these pay packets were for the year preceding the Covid-19 outbreak. The fallout from the pandemic is likely to intensify feelings next year, says Richard Lim, CEO of Retail Economics. “There’s always a renewed focus on exec pay and bonuses when the economy is in difficulty,” he says. “It’s not seen as the right thing to give execs huge rewards.”

Particularly when those rewards are pitted against the more modest hourly pay of frontline staff. “To maintain payments worth several million pounds a year to individual executives will look particularly insensitive if this is contrasted with perceived underpayment of workers on the shop floor,” says Luke Hildyard, executive director of the High Pay Centre.

He points out these workers have helped “ensure the country can function through the crisis at considerable risk to their own health”. For that reason, he’s calling for cuts to the top salaries to pay for an increase in the lowest wages. “Reductions in pay for supermarket executives – who could afford to be paid quite a bit less and still remain very well rewarded – may have to be contemplated, discussed and ultimately enacted,” says Hildyard.

Co-op boss Steve Murrells has already taken on board that ethos. In April, he pledged to donate 20% of his £870,000 annual salary over a three-month period to the Co-op Members’ Coronavirus Fund, which goes towards food banks, funerals and frontline community causes. Similarly, John Lewis chairman Sharon White and other members of the top team took a 20% pay cut from April, initially for three months. M&S has cancelled its exec bonus scheme for 2020/21.

Not everyone has committed to going down that route, however. Aldi says it has “no plans to change our approach”, while others have remained tight-lipped. Tesco promises to “give its full consideration to ensuring that executive reward is fair and appropriate”, while Iceland has “no post-pandemic plans at present”.

Whatever those plans may be, unions believe shop floor staff should be a priority. “Millions of low-paid workers have provided essential services to help ensure the country is fed, healthy and safe through the coronavirus,” says Usdaw general secretary Paddy Lillis.

In light of that effort, he wants to see hourly wages increased to a minimum of £10 – a rate only earned by Aldi and Lidl workers in the London area.

GMB similarly believes shop floor workers should be rewarded over and above board members. “The people that have suffered and put themselves out are the ones down there serving the customers,” argues Jenkins.

Unite, which represents Sainsbury’s workers, calls for “short-changed” staff to get a permanent increase to their base pay. “In April, Sainsbury’s workers received their annual pay increase, which worked out at a derisory 10p an hour for most workers,” says Bev Clarkson, Unite national officer for the food industry. “Some didn’t even get this paltry amount due to the nature of their contracts, yet Mike Coupe pocketed a £7m bonus.”

There are few who would disagree with the notion of levelling the playing field. In reality, though, it may be tough to push through. The coronavirus has already incurred plenty of extra costs for supermarkets. In a trading update in May, Morrisons warned it was operating in a “more volatile trading environment, which is costly”. That same month, Sainsbury’s said it was forking out an extra £500m as a result of the crisis.

So raising staff wages could prove an unpalatable prospect. Indeed, despite all the talk of raising pay, Asda is already fighting against a court ruling that specified it should pay shop workers the same as depot staff. And in spring, the British Retail Consortium said it was “not the right time” to push through increases to hourly rates. (It has since revised its position, and simply urged that wage increases don’t put jobs at risk.)

Financial services company Hargreaves Lansdown can understand the caution around the issue. “A 10% increase in staff cost could lop up to 25% off full-year operating profits for the supermarkets,” points out equity analyst Sophie Lund-Yates. A 10% increase in pay at Tesco, for example, would equate to an extra £626.6m in costs. “It’s also important to remember the grocers have taken on thousands of extra staff to help manage the crisis,” she points out. “If those staff stay on the cost becomes even more considerable.”

There is also the issue of supply and demand. Supermarkets all pay above the £8.72 hourly national living wage. Lim of Retail Economics believes there will be little incentive to increase those “competitive” rates as the job market shifts in the favour of employers. “With unemployment expected to rise steeply over the coming months there will be a bigger pool of workers looking for jobs,” he points out.

Steve Simmance, MD of fmcg recruitment company The Simmance Partnership, similarly doubts wages will increase. “If anything, Covid has only expedited a longer-term decision to cut jobs and salaries,” he says. However, he believes there are other ways to improve employee wellbeing. “I think where employers need to invest money isn’t into pay packets but a clear strategy from HR around wellbeing and mental health. It needs to be made abundant and apparent to those workers who may find their lives turned upside down.”

Mandy Watson, MD of Ambitions Personnel, stresses that employers must make staff feel valued – whether through pay or other means. “The ways in which they act towards staff at this time will also remain long after the pandemic subsides,” she stresses.

That’s a crucial point. Because supermarket staff may not get an increase in pay but, during this pandemic, they have most certainly increased their value.