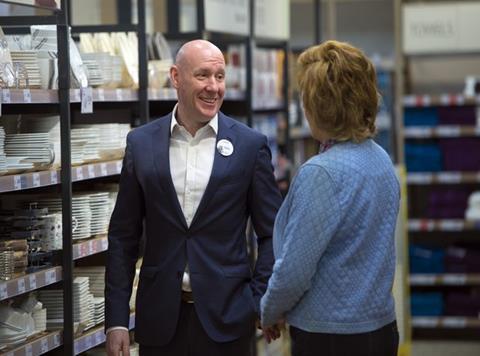 Tesco has announced a major a shake-up of its overseas and UK management after it was revealed international CEO Trevor Masters is to step down after 38 years with the company.

Tesco boss Dave Lewis said the new international structure would allow Tesco to focus on the different challenges posed by the markets in Asia and Central Europe.

Masters began his Tesco career as a teenage management trainee before going on to serve in positions including operations director for the UK, where he helped grow Tesco’s Extra format.

He was then instrumental in growing Tesco’s joint venture businesses in India and China.

For the past two years, he has been in charge of rationalising Tesco’s international business.

Masters will leave the business at the end of May.

Hoggett joined Tesco as a 19-year-old in 1990 and served as a store manager before taking on executive roles including leading Tesco’s business in South China.

In 2010, he joined the Turkish board as chief operating officer before returning to the UK as retail director in 2014, before becoming UK COO in 2016.

Former group food sourcing director Simister made a dramatic return to Tesco n 2014 having been suspended in the wake of the financial scandal but subsequently having been “completely exonerated” of any wrongdoing.

For the past two years Simister has led Tesco’s fresh food and commodities operations, as a key figure in its commitment to reduce food waste.

“I’d like to thank Trevor for everything he has done for our business over the last four decades. He has worked tirelessly to strengthen and simplify our international business, and we couldn’t have made the progress we have without him,” said Tesco CEO Dave Lewis.

“Tony and Matt’s work has been at the heart of Tesco’s turnaround over the last two years and I’m delighted that they will join our executive committee. Their new roles will allow us to focus on the different opportunities presented in Asia and Central Europe and I’m looking forward to working even more closely with them both.”