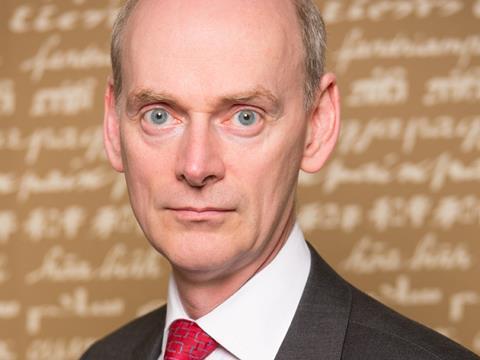 Co-op Group CEO Richard Pennycook is to step down and will be replaced by the society’s retail chief executive Steve Murrells.

Pennycook, who is widely credited from saving the business in the wake of the 2013 crisis surrounding Co-op Bank, has told the board that he wishes to resume his plans to build a portfolio career.

The group said the move was part of “transition arrangements” as it prepared to move from the successful “rebuilding phase” of its turnaround to a “renewal phase”.

Pennycook, who took over at the helm in 2013 during a major crisis for the group had led a rescue and rebuild and now wished to return to his previous portfolio career, the society said.

After a short transition Murrells will become group CEO.

The Co-op said he would concentrate on leading a new long term phase which will seek to put the Co-op back at the heart of communities in the UK, championing causes that are important to them and trading with an ethical heart and a social conscience.

Murrells will join the Co-op Group board on 1 March and Pennycook will step down on the same day.

It was revealed he has agreed to act as an advisor to the Group, primarily focusing on its relations with the Co-operative Bank.

Jo Whitfield who is currently finance director of the food business will become CEO of Co-op Food on an interim basis.

“Richard Pennycook saved our Co-op. In three short years he has rescued and rebuilt our business and restored pride to our 70,000 colleagues and 4.5 million members. We owe Richard a huge debt of gratitude and his place in Co-op history is secured,” said Co-op chair Allan Leighton.

“We are fortunate to have Steve as our new Group CEO. He is a natural co-operator, a great leader and has already done so much to return our Co-op to its former glory. Steve has transformed our food business and put it back at the heart of communities across the country. His leadership has seen our Co-op consistently outperform the market in food and he is the right and unanimous choice to now take the whole Group forward for the next phase of our transformation.”

Pennycook said: “Leaving the Co-op was always going to be hard, but the time is right. The CEO who is to lead the renewal phase in 2018 has to be the CEO who builds the plan in 2017. In passing the baton to Steve, I leave safe in the knowledge that the Co-op will be taken forward by a leader who shares our vision of what can be achieved in the future. Steve has a terrific team around him and an organisation that has rediscovered its self-confidence. I could not be more proud of them all and wish them great success in the future.”

Murrells joined the Group to run its food business in 2012 and has recently overseen an impressive sales turnaround. The Co-op reported strong sales growth over Christmas, with like-for-likes up 3.5% in the three weeks ending 31 December.

Last month he announced plans to massively accelerate its membership recruitment, after claiming its rebooted scheme had smashed expectations.

The society revealed a target to recruit a million new members by the end of 2017 - a year ahead of its original plans, announced in September.

The mutual also hired acclaimed This is England film and TV director Shane Meadows to create a series of short films backing its Join Us campaign to illustrate its support for local causes.

“I’m honoured to have this opportunity to lead our Co-op and to serve our millions of members. I take over at one of the most exciting times in our 150-year history. All the signs are that consumers are looking for a different type of business, one that looks after them and their communities and I truly believe that the Co-op is that business,” said Murrells.

“We have amazing colleagues and a growing and more engaged membership. Now is our time and we are ready to show the country that good businesses that do good things offer a better future for us all.”

President of the Co-op National Members Council, Nick Crofts, added: “Our Co-op survived the crisis of 2013 largely down to Richard Pennycook’s leadership, and on behalf of our millions of members I thank him for that. Steve Murrells is Co-op through and through and a fantastic choice to lead our business into the future. I was delighted to have been part of the appointment process and look forward to working with Steve to strengthen and grow our membership.”