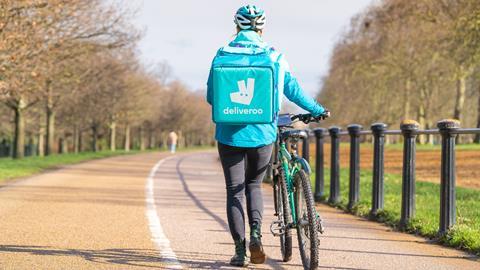 Deliveroo-GMB agreement: who is it helping the most?

Is the partnership a positive deal for Deliveroo riders, or clever ‘union busting’?

Deliveroo and the GMB Union last week sealed a “first of its kind in the world” agreement. The ‘Voluntary Partnership Agreement’ gives rider members of GMB rights to collective bargaining on pay and consultation rights on benefits and other issues.

The Trades Union Congress called it a “landmark” agreement that would “give Deliveroo riders a real voice at work”. Shadow Chancellor Rachel Reeves tweeted that it was “good there are successful businesses who understand the value of trade unions in a modern economy”.

But not everyone is comfortable with the new arrangement. Rider union the IWGB – which has organised the majority of Deliveroo rider strikes and legal challenges - called it “a hollow and cynical PR move”, accusing the GMB of “claiming to represent [workers’] best interests but in fact signing away their basic rights”.

Who stands to gain from what Deliveroo has called a “historic” agreement? Who stands to lose? And is the relationship between employer and union too close for comfort?

The move is a coup for Deliveroo, which according to research by the Centre of Employment Relations, Innovation and Change is the most protested gig-economy firm in the world.

“It’s part of a much longer PR campaign that Deliveroo has been running, only now supported by an organisation that purports to campaign for workers,” says Dr Jamie Woodcock, author of The Fight Against Platform Capitalism and The Gig Economy.

“The way it is being used effectively now blocks the IWGB from seeking statutory recognition on behalf of its members - as well as undermining the ongoing legal action that the IWGB is pursuing,” Woodcock adds.

It could be good financially, too. Ahead of its IPO last year several leading fund managers said they were shunning Deliveroo stock due to concerns over workers rights. One – BMO Global – called the company’s employment practices a “ticking bomb”. Deliveroo revealed in its IPO prospectus it had set aside more than £112m to cover potential legal costs in five countries. It has won several cases in the UK confirming rider status as self-employed. Some are ongoing. 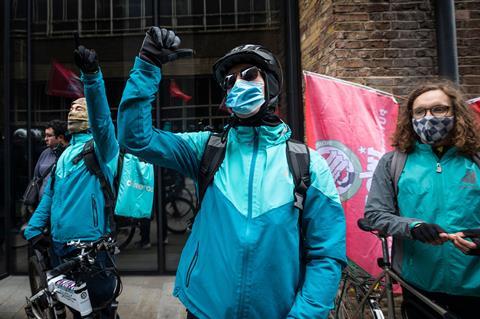 Although the announcement did little to stem the falling value of its shares, with its first AGM on Friday (20 May) the agreement could settle shareholder nerves.

“Deliveroo will know that this doesn’t resolve the issues. However, it could work as a form of union washing - helping to allay fears that investors have,” Woodcock says.

On the face of it, it’s also a boost for GMB, which is keen to push the merits of the deal. “GMB has a long track record of organising in the platform and food sectors and will continue to lead the way through this ground-breaking deal,” national officer Mick Rix tells The Grocer.

It’s particularly beneficial considering that, like many unions, GMB has seen membership plummet. It now has an access to Deliveroo’s 90,000-strong rider base.

GMB would not share how many Deliveroo riders are already members, but several experts believe it to be few, if any. “After five years of research I am not aware of a single Deliveroo worker who is a GMB member,” says Callum Cant, author of Riding for Deliveroo.

But Cant also points to the reputational risks for GMB, which has previously been accused of being “the employer’s friend”.

“GMB has parachuted into this deal, appearing out of nowhere to offer the platform a cushy partnership,” he says.

Indeed, a co-branded, high-production video marking the ‘new partnership’ on social media was considered by one viewer “not a good look at all”.

The relationship between Deliveroo and GMB is undoubtedly close. Within minutes of emailing questions to the union about the criticisms, The Grocer was telephoned by Deliveroo’s director of corporate communications to defend the deal.

Public image aside, the agreement immediately concedes riders to be self-employed – something the IWGB has long campaigned against.

It also agrees that rider ‘work’ relates to “time on order”: the time between accepting a job and dropping it at a customer’s door. Deliveroo says this must be the case as it wouldn’t pay riders when they are logged onto the app, as they may be ‘multi-apping’.

“By accepting Deliveroo couriers’ status as independent contractors, it undermines couriers’ ability to enforce their rights and minimum earnings outside of time directly spent fulfilling orders,” the IWGB says.

“While formal union recognition at Deliveroo is a positive signal, it remains to be seen how significant this will be and whether riders will see more rights and protections,” the think tank adds.

And of course, it does not stop riders protesting, nor joining other unions.

“This deal is their attempt at union busting that aims to replace a combative union with a compliant one,” says Cant. “Unfortunately for them, it is the workers’ who choose their union - not the bosses”.