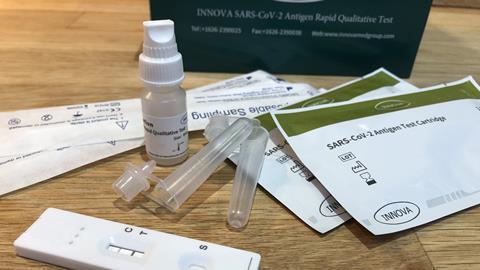 How does the government’s rapid Covid testing scheme work for businesses?

The government is encouraging food businesses to sign up to an employer-led testing scheme, through which they can receive free tests for staff members without symptoms who cannot work from home. It is the realisation of an effort first revealed to Defra’s food and drink industry war room by Mike Coupe, then director of Covid-19 testing at England’s Test and Trace agency, back in November.

Which businesses qualify for the scheme?

Defra is inviting all businesses in the food sector in England with more than 50 employees to register for the scheme. Several are already taking part, including Tate & Lyle Sugars, Primula, Moy Park and Apetito.

To register their interest in the scheme, businesses must send their company name, registration number, contact details and sector type, along with the number of employees to P-and-PSector@dhsc.gov.uk with ‘Register interest for National Worker Programme’ in the subject line.

What tests are available?

The test being supplied are of the lateral flow technology (LFT/LFD) type, specifically Innova’s SARS-CoV-2 Antigen Rapid Qualitative Test. Users self-administer a throat and nasal swab, which is dropped on to a supplied device. A result of negative, positive or invalid displays on the device within about 25 minutes.

How do employers administer the tests?

Employers need to set up a dedicated space to administer the twice-a-week tests, which must be supervised by a member of staff. Organisations will need to carry out a site risk assessment. Sample materials need to be treated as healthcare waste, with specific regulations regarding disposal. The government is providing training packs and online guides to support workplaces with testing.

Employees self-register with their phone number and email address on an online portal. The results of their tests are uploaded by the employer, via a provided device, and employees are notified via text or email.

Can employees be given a test to do a test at home, before they come into work?

The current offer does not yet include LFD tests that employees take at home without assistance and supervision. Nor does it cover the daily testing of the contacts of those who have tested positive, so they can potentially avoid self-isolating.

However, this could change. Defra says approval for home testing from the Medicines & Healthcare Products Regulatory Agency is “ongoing”.

What happens to employees that test positive?

Those who test positive will need to self-isolate as per government guidelines. They must continue to do so for 10 days after the positive result, and longer if symptoms persist.

Under current legislation, employers do not receive employee test results directly. The results are shared with NPEx (National Pathology Exchange) prior to anonymised onward distribution to Public Health England.

Can a business force employees to get tests?

No. Testing cannot be compulsory, according to government guidance.

Businesses can help matters by ensuring employees are supported through any period of self-isolation. According to the Huffington Post, the head of NHS Test and Trace Dido Harding told a CBI webinar that her biggest concern was not people failing to self-isolate, but not coming forward for a test.

“The biggest challenge there, is less people not following the isolation guidance, it is people not coming forward for testing in the first place – people who were scared that there isn’t financial support,” Harding said.

What do small companies who don’t qualify do to get tests?

There are also several private testing options available. Individual private tests are being offered for between £120 and £150 each, but some companies are offering tests for large businesses for around £15 per head.

“We welcome the government’s involvement but there will be people in the food industry that do not receive tests, do not receive enough tests or otherwise fall through the cracks,” says Steve Roest, CEO and co-founder of private test provider PocDoc.

How reliable are the tests?

The government says the tests “go through a rigorous evaluation by the country’s leading scientists” and are effective in identifying infectious individuals who are not showing any symptoms.

Innova’s device has an overall sensitivity of 76.8% for all PCR-positive individuals but detects over 95% of individuals with high viral loads. There is “minimal difference” in the ability of the test to pick up viral antigens in symptomatic and asymptomatic individuals.

Some experts have warned the Innova test may miss as many as half of Covid-19 cases, arguing a different type of test – a PCR (polymerase chain reaction) test – is more effective.

“Independent evaluations for the World Health Organization have shown that other lateral flow antigen tests are likely to outperform Innova, but even those do not have high enough sensitivity to rule out Covid-19,” says Jon Deeks, professor of biostatistics at the University of Birmingham.

Others, like Jonathan Ball, professor of molecular virology at the University of Nottingham, call it “a useful additional tool for coronavirus control”.

How effective will the scheme be?

Tate & Lyle – one of the early adopters of the scheme – says its trial has seen all 500 workers at its east London factories tested, with five testing positive. A further three colleagues were asked to self-isolate after the tests.

“Mass testing has really helped us get one step ahead of the virus by identifying colleagues who were infectious but showed no symptoms,” says Gerald Mason, senior VP of the company.

“Our colleagues have welcomed it as it means they are much safer in our workplace, and our factories are better placed to continue to feed the nation,” Mason adds.

Moy Park HR director Kirsty Wilkins says the testing programme is enabling the company to “maintain the highest level of vigilance to stop the virus coming into our facilities and help prevent its transmission”.

How popular will the scheme prove?

The government is hoping the food sector will be scrambling to get involved. But some argue it is a significant burden on businesses.

“We’ve seen from other attempted rollouts of ‘free’ tests by the government that just providing the tests creates huge administrative and organisational issues for the companies which are given the tests,” says PocDoc’s Roest. “Proof will be in the pudding in terms of which companies get tests, how quickly they are rolled out and then what happens after six weeks.”

What happens after March?

Defra says the free test kits will be available until 31 March, but has not indicated what happens afterwards. The government has previously urged companies to do their own regular workplace testing of staff.

The government is under pressure from the industry to extend rapid test funding beyond March amid fears it could be hugely expensive for companies, especially smaller ones.