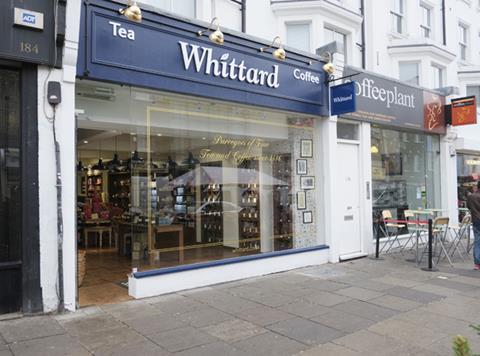 Whittard: international expansion is high on the agenda

Whittard of Chelsea CEO Sara Halton has left the company and been replaced by TM Lewin international director Mark Dunhill, The Grocer can reveal.

Halton left the tea and coffee specialist by mutual consent at the end of December and Dunhill joined on 1 January.

International expansion will be high on the agenda for Dunhill, who at TM Lewin oversaw the opening of 50 international stores, taking the company into 11 new markets.

“We are excited by the opportunities for developing the Whittard brand and footprint internationally and look forward to working with Mark and his team,” said Robert Fulford, investment director at Whittard’s private equity owner Epic.

Whittard currently has nine franchise stores overseas and its products are sold in a number of foreign countries. Last year, the retailer launched local-language websites in Japan, Germany, France and Italy.

Dunhill said: “I relish the challenge of working with the talented and committed management team to realise the brand’s considerable potential both in the domestic market and, in particular, for international expansion.”

Before TM Lewin, Dunhill was CEO of jeweller Fabergé and worked for many years for Alfred Dunhill in the UK and across Asia.

Since Epic bought Whittard out of administration in 2008, it has closed a large number of stores in an effort to return the business to profitability. Store numbers have fallen from 130 to 55 today.

Fulford praised Halton for the contribution she had made to the business in her two and a half years in charge. “In 2013, Whittard made significant progress in profitability,” he said.