Martin Williams: a landmark in wholesaling 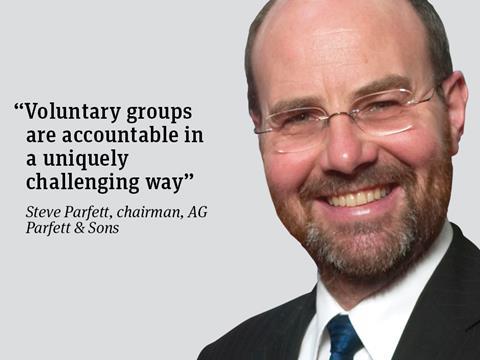 The departure of Martin Williams from Landmark Wholesale allows me to consider the challenges of managing in a voluntary group. But before I do I must declare an interest as not only have I worked with Martin for many years but he is also a close friend.

Working for the same company for 33 years is a huge achievement, especially when that culminates in running the business.

During my time as Landmark chairman I worked with three excellent managing directors: Steve Denny, Mike McGee and Martin. When Mike left, Martin, who had been a very successful trading director, applied to replace him.

I carried out the interview hours before having back surgery, only able to function by lying motionless and flat on my back. It concluded with one of my best decisions ever, and Martin was given the job.

While all businesses are by definition answerable to stakeholders, voluntary groups are accountable in a uniquely challenging way. Managing and communicating with individual members is like herding cats, with each member having different needs and opinions, often changing regularly. Supplier relationships are equally critical, as without their confidence in the group and its strategy, failure is inevitable.

The right team is vital - everyone has to appreciate that they are as accountable to the members as to the management and board and not everyone is able to cope with the frustrations.

As trading director, Martin was used to the supplier element, and knew of the frustrations, but had a whole new set of challenges in the new role.

As everyone now knows, he stepped up to the challenge superbly, and as able people often do made it look simple.

He has done so by a fantastic ability to manage the conflicting pressures mentioned through a combination of good humour, consummate negotiating skills, selflessness and a massive capacity for sheer hard work.

The fact that Martin can sometimes be a control freak and wind-up merchant are part of his grounded personality. While not always an easy taskmaster, he built up an effective and extremely loyal team at Milton Keynes.

I take no credit for this success story - the plaudits all belong to Martin. He has been a hugely successful and respected MD for 14 years at Landmark and his respect among industry colleagues is huge, culminating in a very successful term as FWD chairman.

I will take no part in the process of replacing Martin.