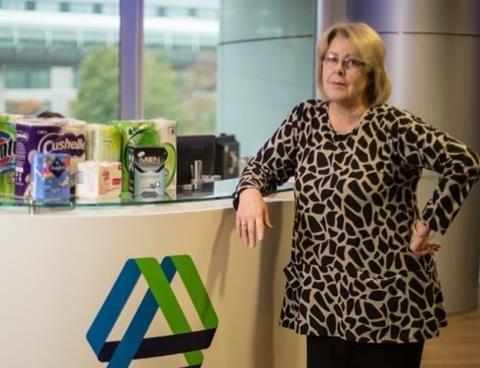 “Attitudes have changed dramatically from when I started as a young marketer,” says Barker. “Now you have to talk to women exactly as it is.”

It’s the reason a spoof film by one of its brands, Bodyform, mocking one man’s outdated view of menstruation (and featuring fictional CEO Caroline Williams) got more than five million hits on YouTube in 2012 and why the brand’s latest £4.5m TV ad campaign pokes fun at old-fashioned tips to girls. It also features the brand owner’s sponsorship of the first all-female sailing crew to take part in the nine-month Volvo Ocean Race. The team won the eighth leg of the round the world race between Lisbon and Lorient, an achievement captured in 40 images currently on display at London’s Getty Images Gallery.

The message of female empowerment as the crew battled 38,000 miles of ocean appealed to its core demographic, says Barker, with 80% of SCA’s products bought by women. It also suited a company with a rare 50/50 split of men and women in its UK senior management team and a female at its helm. “Hand on heart, gender has never been an issue for me,” says Barker. “I find it quite sad that in some companies it’s different.” Its female-centric product portfolio isn’t an excuse either, she insists. “I think it’s more to do with culture than the type of product.”

Most significantly, the campaign helped to raise the profile of the corporation behind the brands, with SCA branding emblazoned in pink and purple across the team’s racing boat. “We’ve got some incredibly well-known brands around the world and the UK, but very few people knew the company that sat behind it,” says Barker. “Looking at how consumers approach and choose brands, especially the young generation, they’re really interested in provenance so for us it’s about connecting those two things.”

It may have operated behind the scenes until now, but SCA has seen its pre-tax profits rise globally by 13% year on year to £695m in the third quarter of 2015, with sales up 5%.

“Favourable growth” in toilet tissue (of which SCA is the world’s second-largest supplier) helped drive this growth, despite the challenge of operating in a category shown little love by the supermarkets. “You have to make sure you won’t just become something that is over-promoted,” says Barker. “The norm for retail is to use it as a traffic driver to attract people into store.”

A diverse portfolio operating in opposite ends of the category helps SCA overcome this, says Barker, with premium Velvet appealing to those who like their loo roll soft, quilted and “luxurious”, and cheaper Cushelle (changed from Charmin when the brand was acquired from P&G in 2007) aiming for young mums and families instead. For both “it’s about having really engaging messaging and brand personalities” as, believe it or not, “people are really interested in their toilet tissue,” she says.

Velvet’s customers like their luxury ethical, too, with the brand launching its Three Trees promise in 2009. It pledges to plant three trees for each one chopped down and to date it’s planted more than seven million. “We knew that sustainability was becoming a really high interest for a significant group of consumers and coming out of this economic downturn I think people will place greater focus on the ethics of a brand,” says Barker.

The campaign goes above and beyond the industry norm of only replacing soft wood trees, but Barker isn’t throwing down a gauntlet for her competitors. “I don’t think there is anything the industry needs to step forward on with sustainability,” she says. “What we’re about with Velvet is just going a step further.”

It isn’t all about brands though, and Barker admits the own label market (making up 40% of toilet tissue) is hard to ignore. It’s why the company supplies UK retailers their loo roll to a value of £300m. “If you only do brand you’re only operating in one part of the market,” she says. “The business we do on own label, we do properly, we treat it as brands. The retailers we’re doing business with are brands in their own right, after all.”

Barker also relies on the retailers to push SCA’s brands online, despite the potential of delivering big and bulky packs of loo roll to consumers on their doorstep. “If you look at the top five retailers, between them they cover about 78% of the market online. That’s phenomenal,” she explains. “From my perspective, our shoppers have already got an enormous choice online, and there’s the challenge of making it work economically to sell toilet tissue at a low retail sales price too.” The only exception is Tena Direct, which is bought up in bulk directly from SCA by homecare providers and consumers in larger quantities.

Instead, Barker’s focus in the next 12 months will be on NPD adding to the 30 pieces of innovation already brought to market in the past two years under her leadership. “The most difficult thing in this market is raising your game every single day,” she says. “If you stand still, very quickly competitors are all over your back and you suffer so we’ve got to have a pipeline of innovation coming into the market that tick category drivers.”

First off, that will mean pursuing “the enormous opportunity” of the underdeveloped male incontinence category, she says, though the difficulty has been convincing men to open up. “We’ve had Tena for men in the market for quite some time but it’s been really difficult to unlock the attitudes of men toward bladder weakness,” she says. And that’s where she hopes silver fox Stirling Gravitas can help.

The quirky character of a distinguished older man (in control over absolutely everything other than his bladder) was front and centre of the launch of the Tena Men Protective Shield in September, starring in a series of comical digital films to put men at ease. “He strikes the perfect balance of humour in what is quite a difficult situation,” says Barker. And if that isn’t enough for embarrassed blokes, the pad is completely black to make it feel more “manly” too.

With one in four men over the age of 40 now suffering from “drips and dribbles” Barker is convinced it’s worth all the effort. Even if men haven’t quite caught up with women when it comes to straightforward talking.