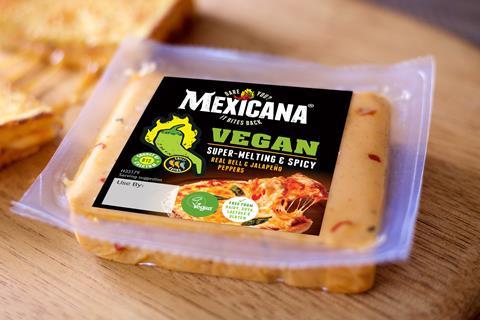 The launch follows the success of Norseland’s Applewood Vegan last year, which sold out after going on sale in Asda

Cheese supplier Norseland has further expanded its plant-based repertoire with a first vegan variant for its Mexicana brand.

Produced in association with Heather Mills’ V Bites brand, the coconut-based Mexicana Vegan follows the successful launch of Norseland’s Applewood Vegan last autumn and a new Applewood Vegan slices variant, which is due to go on sale in Sainsbury’s next week.

The product will go on sale exclusively in about 300 Asda stores nationwide from 20 July (rsp: £2.30/200g). It contained the same “fiery” spice mix and real bell and jalapeño peppers as its dairy-based Mexicana cousin, Norseland said, and was fortified with vitamin B12 and calcium.

The Vision of V Bites: how Heather Mills is building a Silicon Valley for plant-based food - in Newcastle

After Applewood Vegan sold out of 40% of the Asda stores that initially stocked it in its first three days on sale, the brand’s success proved there was “a real demand for vegan alternatives to cheese, not just from vegans, but from flexitarians too”, said senior brand manager Lisa Harrison.

“What was key in its popularity was how well it melts like its dairy cheese counterparts,” she added. “We applied the same logic to the creation of Mexicana Vegan and our taste panel of spicy cheese enthusiasts are already hooked on it, because it’s super-stringy when it melts and has all of the flavour of Mexicana – including a spicy kick.”

Vegan cheese continued to grow in popularity, added Asda cheese buyer Laura Sparkes. “We love the spicy flavour and know our customers will agree. It is hard to believe this is a dairy alternative.”