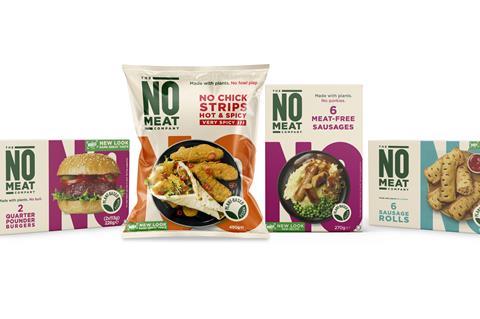 Source: The No Meat Company

Plant-based brand The No Meat Company has unveiled two pieces of NPD and a new pack design for its range.

The frozen brand – which was acquired from Iceland last year by global plant-based consolidator the Livekindly Collective – has launched a pea and wheat protein-based frozen sausage SKU (rsp: £2.25/270g), and a pea protein-based hot & spicy no chick strips line (rsp: £3/450g) into more than 700 Iceland and The Food Warehouse stores nationwide.

The brand said its new pack design, meanwhile, was “contemporary” yet “distinctive”, and would offer “standout with plant-based category signposting” in freezers.

The revamp is being supported by a new ad campaign carrying the tagline ’Say yes to No Meat’, designed to encourage shoppers “to make a positive change by making some plant-based switches”. It went live out-of-home and on digital on 22 June.

“To us making healthier choices should be simple, especially when swapping out meat for a plant-based alternative,” said The No Meat Company’s UK general manager Domenico Speciale.

“We’re all about fuss-free food, offering staple products that can easily be incorporated into your favourite meals without reaching for a recipe book for inspiration. The new look and feel of No Meat represents exactly that.”