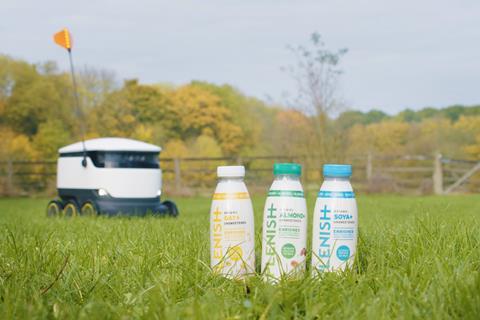 Consumers can order litre bottles of the milk via robot courier company Starship’s app, and have it delivered to their door by a six-wheeled autonomous bot.

On the first day of a three-month trial of the service - which began on Tuesday in the eastern area of the town - Plenish experienced “overwhelming demand” and sold out a pallet’s worth of its products.

Although described as the “world’s first robot milk round” the service sees robots run between a local hub and a customer’s home, delivering one order at a time. The service operates from 9am to midday each day, and it is expected the range of items available will be expanded.

Residents of Milton Keynes have been able to use the Starship app to have groceries from the Co-op delivered to their door since last year. Co-op extended robot deliveries to a second store in April. A Tesco Extra store was added to the app in January.

Plenish is stocked in Waitrose, M&S and Sainsbury’s in Milton Keynes, so had not been available for robot delivery until now. With sales through those stores, as well as direct-to-consumer sales, the company said it knew it had “a lot of customers” in the area.

“It felt good. It made total sense,” said Rosen.

The company is eager to reduce the carbon emissions produced as a result of “nipping out for a pint of milk” by car, Rosen said. Plenish claims production of its plant-based milks has “70% fewer carbon emissions than dairy”.

“Climate crisis is a very overwhelming thing to tackle,” Rosen added. “Our whole thing is about small changes we can all do collectively to ladder up to the big change.”