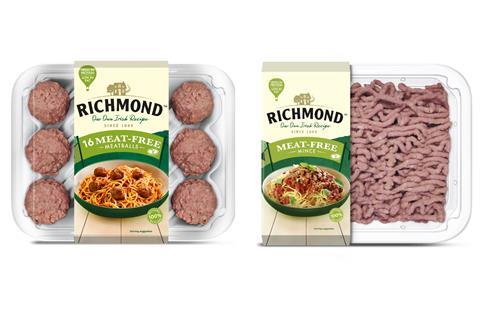 Richmond has announced an expansion in its plant-based offering with the launch of new meat-free mince and meatball vegan SKUs.

The NPD duo were said by the Kerry-owned brand to have been designed to mimic the taste and texture of beef. Both would offer “fuss-free and accessible” options for family meal occasions, Richmond added.

The mince (rsp: £3/335g) and the meatballs (rsp: £3/352g) have been made from rehydrated textured soya and wheat protein and were said to offer an accessible price-point to entice new consumers, Richmond said.

Both products rolled into Asda today (23 March) and are also set to hit Sainsbury’s stores from 21 April.

“We know the meat-free market is booming but we’re seeing a real opportunity for growth in shoppers who are looking for affordable, delicious meat-free food to slot into family favourites – that they know will result in clean plates all round,” said Kerry Foods marketing and category director Victoria Southern.

“We’ve been blown away by the success of our Richmond Meat-Free range so far and are using this momentum to help retailers offer even more choice at mealtimes and recruit new shoppers to the meat-free category.”

The launch will be accompanied by a £3.5m marketing campaign across TV, video-on-demand and social media from 12 April. Kerry said the new advert would champion Richmond’s “100% taste credentials” with an additional creative set to appear later in the year. It follows a similar primetime push in 2020 for the brand’s entire sausage line-up.

Richmond first entered the meat-free category in 2019 with the launch of a plant-based version of its sausages, after Kerry acquired Dutch maker of textured meat alternatives Ojah the previous year. Last September, it added a plant-based burger to the range.