The ‘marrot’ is a witty response to intolerant vegan doctrine 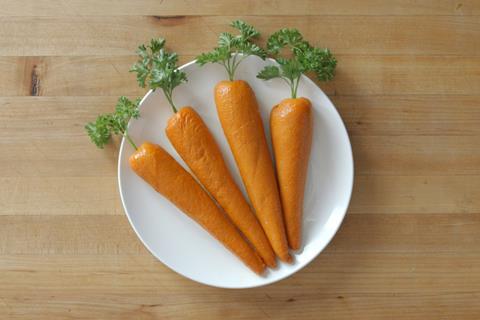 The marrot (pictured) speaks to all of us who are sick to the back teeth of ultra processed pseudo-animal products, says Joanna Blythman

Last year Jim Mundorf, a US cattleman and blogger, invented his ‘meat-based carrot’, a satire on the ‘plant meat’ industry.

He rolled minced beef into a carrot shape, stuck a couple of green leaves on the top to give it that ‘just-picked’ look, and posted the image. Meatless meats, he pointed out, don’t exist any more than carless cars.

“Where I come from, if you try to sell something by calling it something that it isn’t, they call that fraud. But that’s not how it works on Wall Street, or in investment presentations in Silicon Valley. There you don’t have to make sense as long as you can explain your lie with more lies and show a graph that has up arrows on it.”

Mundorf has taken the theft of his intellectual property rights over the meat-based carrot with good humour now that Arby’s, the meaty sandwich chain, has lifted his concept.

Arby’s was already spoiling for a fight with the pseudo-meat lobby when it announced it was not interested in working with Impossible Foods. While the media and other chains have been fawning all over Beyond Meat and Impossible Foods, Arby’s has introduced the world to a new category it calls ‘megetables’.

Now a video of its first attempt, the marrot, is doing the rounds on social media, where its ingredients – turkey breast, carrot marinade and maple syrup powder – are shown in vivid contrast to a paragraph-long list of the hi-tech ingredients in faux burgers.

Naturally the plant-based army is up in arms. Peta’s executive vice president Tracy Reiman isn’t amused. “The joke here is on Arby’s for its sad stab at mocking those who are eating as if it’s 2019, not the Stone Age, and failing to recognise that it’s an increasingly vegan world.”

But the marrot speaks to all of us who are sick to the back teeth of the intolerant assertion of vegan doctrine, and the relentless hyping of ultra processed pseudo-animal products that goes hand-in-hand with it. I for one laughed when I saw Mundorf’s prototype marrot, and smirked again when it was so slickly developed by Arby’s.

The more food fakery is marketed to us as the future, the more we’ll need our sense of humour.